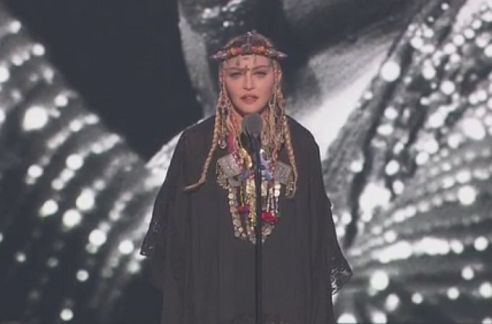 Madonna has sparked fury and criticism after turning a speech that was meant to be in tribute to Aretha Franklin, well, all about herself.

The Material Girl, dressed like an extra out of Game Of Thrones, took to the stage to present the ‘Video of the Year’ award at last night’s MVAs but before doing so, set out to pay tribute to Aretha, who passed away last Thursday.

Rather than focus on Aretha’s accolades, Madonna went on to talk about the early origins of her own career and success. In fact, the only mention of Aretha was that Madonna once sang (You Make Me Feel Like A) Natural Woman at an unsuccessful musical theatre audition. She then attributed that failure to her shifting into a different career, hence the reference came across more as a backhanded compliment.

She did, however, end her allocated camera time by saying, “I want to thank you, Aretha, for empowering all of us. R-E-S-P-E-C-T. Long live the queen.”

Viewers were shocked enough to throw shade across Twitter, lambasting Madonna for her vanity.

“Madonna presents an Aretha Franklin tribute by Madonna featuring Madonna with Madonna and Madonna as ‘Madonna’,” joked Entertainment Weekly‘s Marc Snetiker, while Kevin Cannon said, “So pretentious always. She’s just hitching her star to Aretha with that story. Really an insult to the legacy of Aretha Franklin.”

Others were quick to point out the subtle racist undertones, with one critic wondering, “Why was Madonna talking about crack houses?” in reference to the singer’s early days in New York when she first arrived with just $35 in her pocket and yada, yada, yada…

Really Madge, we’ve heard it all before. And this wasn’t the time to bring your past glories up again.  Antonino Tati

Madonna has since responded via social media on Wednesday saying, “Just to clarify: I was asked to present video of the year by MTV! And then they asked me to share any anecdotes I had in my career connected to Aretha Franklin! I shared a part of my journey and thanked Aretha for inspiring me along the way. I did not intend to do a tribute to her! That would be impossible in 2 minutes with all the noise and tinsel of an award show. I could never do her justice in this context or environment. Unfortunately most people have short attention spans, and are so quick to judge. I love Aretha!”