Susan Sarandon and Geena Davis taking one of cinema’s most famous (and first ever) selfies in Thelma & Louise.

Cream presents a fresh column that highlights the films you seriously ought to have seen by now. From cinema’s early days of black-and-white and silent pictures to contemporary, CGI-packed blockbusters, and plenty of low-budget indie flicks in between, this is the column to turn to before ogling your movie streaming options.

Next off the rank: Ridley Scott’s Thelma & Louise.

The film for which Ridley Scott was to receive his first Academy Award nomination for Best Director, Thelma & Louise stars Geena Davis and Susan Sarandon as two best buddies who find themselves on the run from the law. Released in 1991, first time screenwriter, Callie Khouri, won the Oscar for Best Original Screenplay in a ceremony almost entirely dominated by The Silence of the Lambs in all other major categories.

Thelma & Louise follows two close friends as they set out for a weekend away together, driving through the countryside in their ’66 Thunderbird convertible. When they find themselves at a roadhouse bar late at night dancing and drinking with some of the locals, Thelma (Davis) is taken outside by a man and is proceeded to be violently attacked. Louise (Sarandon) discovers her just in time, pulling a gun on the man in order to have her released, and eventually shooting him dead when he declares he would have raped her if Louise hadn’t arrived. Deciding that their story would not be plausible enough for police to be spared a murder charge, they proceed to attempt to cross the boarder into Mexico and disappear for good.

The movie has become an iconic piece of feminist cinema and is one of only a handful of films to have two women both nominated for Best Actress.

According to Khouri, the concept of the film had been in development with Scott attached in some capacity since the early 1980s, with a string of leading actresses being considered throughout, from Natalie Wood and Tuesday Weld, to Liza Minnelli and Jessica Lange, to Goldie Hawn and Anjelica Houston, to Meryl Streep and Glenn Close. The film also casts a 28-year-old Brad Pitt in one of his first major Hollywood roles, playing the part of a drifter called J.D. who the women pick up and with whom Louise eventually becomes infatuated with.

The movie has become an iconic piece of feminist cinema and is one of only a handful of films to have two women both nominated for Best Actress. Controversial upon its release, Scott and Khouri were initially accused of glorifying and romanticising violent, anti-authoritarian behaviour. Critics were quick to highlight the almost exclusively negative depictions of men throughout the movie,with every male character being shown as either violent, abusive, criminal or corrupt. But it was its brutal and honest depiction of leading female characters in strong, interesting roles, as gritty, non-sexualised, gun-toting anti-heroes that eventually attracted critical and commercial praise and ensured its legacy in history.

The film’s harrowing final shot is one of its most enduring images, with both women making a pact to continue driving off a cliff instead of turning back to hand themselves in to a relative army of state troops behind them. Scott’s decision to not continue to show the crash itself, but simply hold the frame frozen before fading to credits, is a rather ingenious way of forcing us to consider, despite all odds, an alternative fate that doesn’t involve the story’s central characters dying. An alternate ending was included in a subsequently extended edition of the film released on DVD which shows the car plummeting into the ravine, followed by a rather ambiguous shot of Thelma and Louise back on the freeway again, which Scott claims was supposed to symbolise a glimpse into the afterlife. 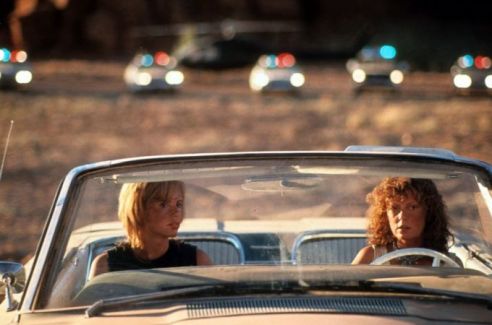 Despite the decades that have passed since its release, Thelma & Louise, rather unfortunately, still seems to shock. It’s women fighting back, women killing, women seeking revenge for sexual assault, outrunning and out smarting authorities, picking up and sleeping with strangers. It’s women that get messy, make the wrong decisions, fall in love with the wrong people, and end up paying dearly for their mistakes. These are anti-heroines who are at once unsettlingly depicted and somewhat unpolished yet completely relatable to us all.