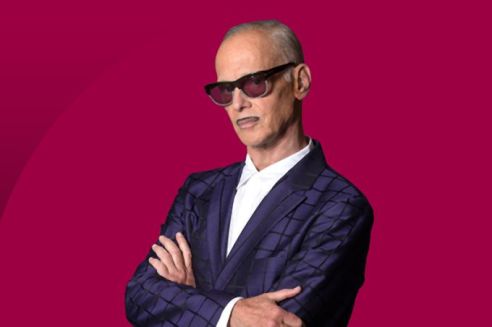 He’s the director who insists on shooting some of “the filthiest people alive” doing the most bizarre things you’ll ever see committed to celluloid.

So filthy and bizarre that John Waters has rightly earned the title of ‘Pope of Trash’.

Now he’s bringing his dirty, dirty brand of comedy to the Sydney Opera House Concert Hall for one night only on Tuesday 15 October to serve up salty reflections on the world today, stories behind his camp obsessions, and anecdotes on some of his regular cast members, including Divine, Mink Stole, Edith Massey, and Patty Hearst.

“I have high hopes the audience for this unmissable talk will laugh, cry, and need to suppress a vomit.” Dr Edwina Throsby

Waters’ colourful catalogue of films include Hairspray – starring a starry-eyed Ricki Lake in her first big-screen appearance before the story was morphed into a massively popular musical; Cry-Baby lead by Johnny Depp as a doo-wop ’50s bad boy with a closet sensitivity; and Serial Mom starring Kathleen Turner as a serial-killing soccer mom. Oh, and just about anything starring delicious and disgusting drag diva, Divine (may she rest in peace).

“John Waters’ unique and distinctive aesthetic has had an immeasurable effect on cinema and queer culture,” says Sydney Opera House Head of Talks & Ideas, Dr Edwina Throsby, before cascading into typically trashy Waters with: “I have high hopes the audience for this unmissable talk will laugh, cry, and need to suppress a vomit.”

As well as having blessed pop culture with an awesome array of twisted titles that include Mondo Trasho, Female Trouble, Pink Flamingos, and Desperate Living, Waters also created Polyester, the world’s first (and probably only) film that gave viewers the extra dimension of ‘Odorama’ which allowed them to smell what they saw on the screen through scratch-n-sniff cards.

While Waters himself once said, “I pride myself on the fact that my work has no socially redeeming value,” his fifty-year career of filth on film will be recognised this year by the Locarno Film Festival, where he’ll receive the festival’s Lifetime Achievement Award.

And that’s nothing to be sniffed at.