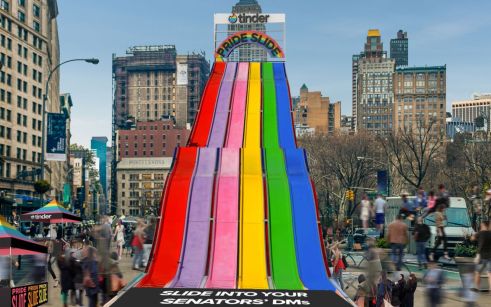 There’s always been a blurred line between dating apps but it was generally considered that Tinder was for straight folks mostly while Grindr catered more for gay peeps. But the former has trumped the latter in targeting the LGBTQ+ community for business this week when it erected a giant rainbow slide slap-bang in the middle of New York City.

Earlier this year, Tinder unveiled a function that allows users to select up to three sexual orientations.

Tinder has installed the six-striped slide in Flatiron Plaza, Manhattan to celebrate Pride Week. Dubbing it ‘The Pride Slide’, punters of all orientations are welcome to ride down the 30-foot slide which is said to represent “the 30 U.S. states that still do not protect the LGBTQ+ community from discrimination,” according to the company.

Once patrons hit the bottom of the slide, they’re invited to provide their email address on a petition that urges lawmakers to support the Equality Act, while simultaneously triggering a donation from Tinder to the Human Rights Campaign.

Earlier this year, Tinder unveiled a function that allows users to select up to three sexual orientations from an initial list that includes Straight, Gay, Lesbian, Bisexual, Asexual, Demisexual, Pansexual, Queer and Questioning.

Which means you could choose to be Bisexual, Asexual and Pansexual all at once… even if that doesn’t really make sense.