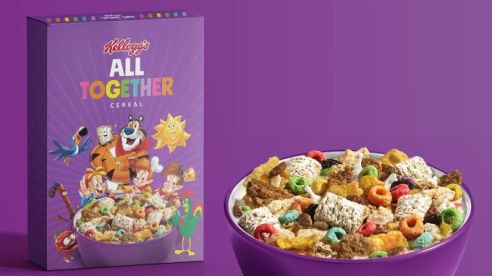 Breakfast has just gotten brighter, thanks to the release of new super-cereal courtesy of Kellogg’s.

Kellogg’s ‘All Together’ cereal landed on shelves in the U.S. last week in conjunction with Spirit Day (October 17) which celebrates inclusiveness, diversity and equality, partnering with GLAAD, the Gay and Lesbian Alliance Against Defamation.

So far the cereal has proven a huge hit, not just with folks of the LGBTIQ community but with – yes, I’m going to say it – normative families and communities.

Inside, you’ll find six mini-packages of Kellogg’s most popular cereals: Raisin Bran, Corn Flakes, Frosted Flakes, Fruit Loops, Rice Krispies and Frosted Mini-Wheats, with the cartoon mascots representing each appearing on the front of the box.

The cereal is not that new, really, since it consists of six small packets of popular cereals packaged in one bigger box. Personally, I’d liked to have seen the actual bran, flakes, loops and pops all mixed in!

Still, it’s all for a good cause, with the back of the box reading, “All Together Cereal is a symbol of belonging no matter how you look, where you’re from, or who you love.”

Spirit Day was started in 2010 by American teenager Brittany McMillan in memory of gay students who took their own lives after being bullied, and Kellogg’s aims to bring the subject of bullying into conversation around the breakfast table; tackling the subject by showing that everyone can get along.

And that’s a sweet gesture. Literally.