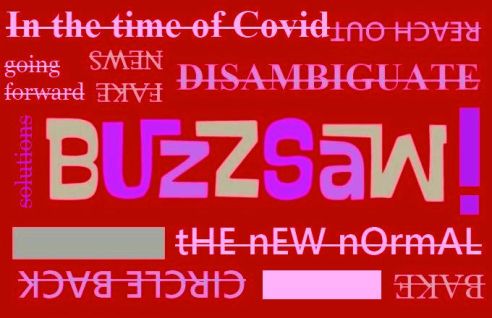 ‘The Buzzsaw’ is an online tool that strips buzzwords out of press releases, speeches and blog posts, and compiles the most popular of these, discovering some shocking phrases and words that really oughtn’t be in the modern lexicon.

The top 15 ‘worst of’ list is based on frequency of submissions from editors and correspondents, principally in Australia, the UK and the US.

Press releases, speeches and key blog posts are checked against a database of thousands of buzzwords and clichés with many matches struck through in red.

This year’s ‘Hall of Shame’ includes such commonly bandied words as ‘curated’ and ‘content’ but also sees the less familiar likes of ‘disambiguate’ and ‘human capital’ make the list. And of course, ‘fake news’ makes an appearance.

With the world just starting to climb out of lockdown, there have been stacks of mentions of ‘the new normal’ and ‘in the time of Covid’.

See The Buzzsaw’s 15 worst words and phrases, below, with judge’s critique to boot.

THE 2020 BUZZSAW HALL OF SHAME

‘Curated’. Judge’s comment: “A word that has been brutalised by Hipster culture.  Google practically anything – potatoes, burgers, you name it – and there’ll be a curated list somewhere in the world.  To make it worse, lists are often ‘carefully curated’, which is tautologous.”

‘Content’. Judge’s comment: “Second only to the vacuum of space as the emptiest thing in the universe.  It’s like calling literature or journalism ‘words’.  It’s the high watermark in the commoditisation of writing.”

‘Disambiguate’. Judge’s comment: “A word that rather cleverly obscures the thing it seeks to clarify.  Like spraying mud on windows to clean them.”

‘The new normal’.  Judge’s comment: “Unfortunately it is catching on.  I get hundreds of emails a week that reference this phrase.”

‘In the time of Covid’. Judge’s comment: “Gabriel Garcia Marquez it ain’t.”

‘Reach out’.  Judge’s comment: “My standard response is ‘back off’.”

‘Ideation’.  Judge’s comment: “A bold attempt to make a bad idea sound better than it is by diverting our attention.”

‘Fake news’. Judge’s comment: “An oxymoron of such heft that only a moron could coin it.  Unfortunately it has caught on.”

‘We remain cautious’.  Judge’s comment: “On a quarterly basis, listed companies invite their advisors to visit them and help them draft their financial results statement, including the outlook statement.  These three opaque words are the most overused and expensive a company will ever buy.”

‘Going forward….’.  Judge’s comment: “I long for the day someone writes ‘going backward’.”

‘Solutions’. Long-time Hall of Shame member, best exemplified by the sticker company that describes itself as ‘a global leader in adhesive labelling solutions’.