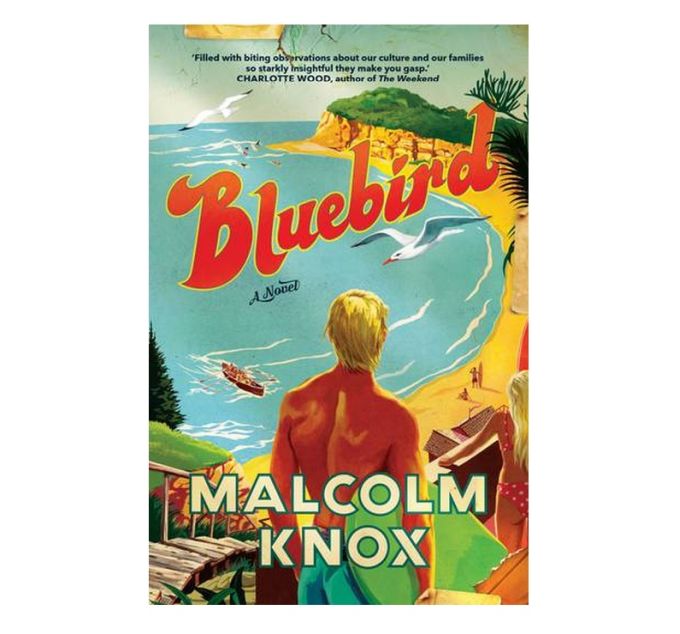 Malcolm Knox is a Sydneysider who was once (and possibly still is) a journalist for the Sydney Morning Herald – but we won’t hold that against him. He also contributed to the paper as its ‘cricket writer’ – hence seems well-aligned with that great Aussie mission of the outdoor leisurely pursuit.

As a novelist, Malcolm knows how to make the Aussie reader feel nostalgic and proud of his suburban heritage, perhaps even angry at the urbanisation and all that has tarnished old laidback attitudes and aesthetics, replacing these with faux versions of the rustic and the organic (cup of lemon myrtle tea at the local bistro, anyone?).

The novel’s opening paragraphs read like a cross between Australian Crawl lyricism and Oscar Wilde cynicism, hinting at cracks beneath the surface of this (apparently) idyllic beach-side suburb. While the cover art teases of nostalgic influence, the setting is actually a post-postmodern one, hastily propped up to hide the signs of capitalism and corruption.

The story’s protagonist, Gordon Grimes, is something of a sad case, stuck in the past and not coping well with the changing scene around him. Put it this way – Gordon was once very proud of this idyllic seaside slice of Australia but feels gentrification has stripped the area of its genuine charm: like the original dwellers of Kings Cross might have felt before real estate agents streamlined the place with hedges and turned it into leafy but stagnant Potts Point.

As dark as the writing in Bluebird often is, and as seedy as some of its characters are, it makes for a great, riveting read – like Leanne Moriarty’s Big Little Lies but on more of a testosterone tip.

Reading it, you too might yearn for the days of yore when there was less one-upmanship amongst and more contentment amongst the Joneses. Or revel in its competitive edge, if you prefer.

Courtesy of Allen & Unwin, Cream has 5 copies of the book to give away. To try winning one, simply email your name, address and the Subject heading ‘Bluebird’ to cream@pobox.com no later than 5pm AEST, Monday 19 October, 2020.

One Response to “‘Bluebird’: a novel that yearns for the past while peeling away at the post-postmodern paintwork”