It may not have been in the bucket-list top 20 but I’d say it was definitely somewhere in the top 100. Seeing Australia’s greatest musical export giving it their all on stage was checked off that list on Friday night when AC/DC took to the stage at Domain Stadium in Perth to salute those about to rock and those who have been following them for ages.

Kicking off precedings with a minute-and-a-half montage of outer-space imagery, the smoothness of space was suddenly interrupted by static and a huge bang to signify that, yep, Acca Dacca were alive and well. Well, half of them, at least.

Still, the visuals never detracted from the real reason these guys were on stage: to rock. Indeed, opening with Rock Or Bust, the rhetoric did not fall on deaf ears (although ears may have been partially deaf by the time the two-hour gig ended).

AC/DC were last in town in 2010 as part of their Black Ice World Tour and while that seems like a while ago, do keep in mind that this is a bunch of 60-year-old dudes doing their darnedest to play it consistently loud – so that’s some energy Brian Johnson and Co are displaying up there.

Also keep in mind that two of the band’s members have been replaced recently – Malcolm Young forced into retirement with his nephew Stevie strapping on the rhythm guitar, and convicted drummer Phil Rudd replaced with Chris Slade – so it was very much up to an ailing Johnson and sole remaining founding member Angus Young to deliver the familiar antics. Sure enough, Angus still pulls off the cheeky schoolkid look at 60-plus, and more importantly delivers those oh-so familiar riffs oh-so well. Young’s energy seemed unbelievable, especially when he played a 12-minute solo at the end of closing song Let There Be Rock, drenched in sweat but dutifully refusing to let those strings rest. 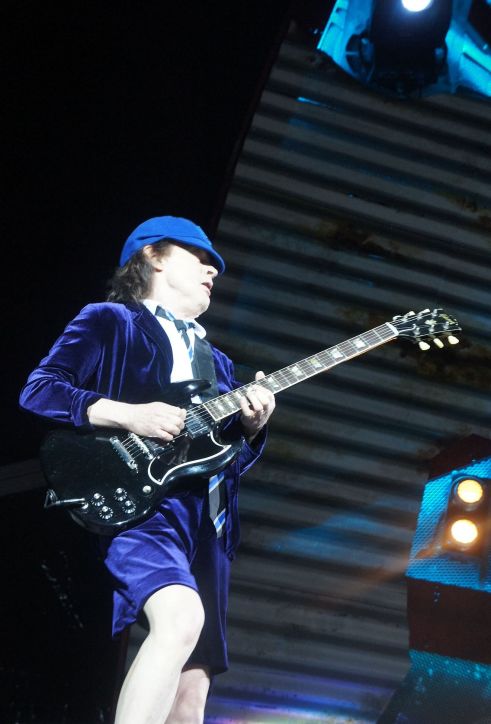 As for Brian Johnson, sometimes he looked like the embarrassing grandpa trying to impress the kids, and a lot of the time you couldn’t understand a word he was muttering (even when you knew lyrics to some of the songs) but, hey, this is rock’n’roll and most of the punters didn’t seem to mind the lack of clarity in lyrical delivery.

The band’s two-hour set featured most of the hits, including Back In Black, Thunderstruck, High Voltage, T.N.T. and, of course, every faux (and genuine) bogan’s air-guitar favourite You Shook Me All Night Long. Hell’s Bells came complete with church-bell sound FX and a giant bell tentatively swinging to and fro from the top of the stage, a trip to see and hear as tens of thousands of lit-up devil’s horns twinkled in the crowd (including one pair on the head of my rock buddy Simone who’d keep hers on all the way home like some kid coming back from the Royal Show).

As if all this light-magic and heavy noise weren’t satisfying enough for even the most ardent metal fan, the show closed with a two-song encore accompanied by cannon blasts and fireworks that’d put a New Year’s lighting show to shame.

Review and photography by Antonino Tati