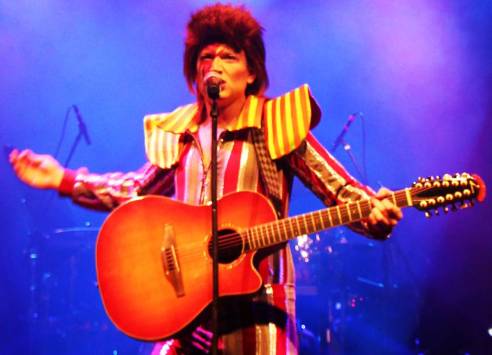 It takes a lot to pay homage to a music legend and not sour the expectations of die-hard fans of the original artist, but Ashes to Ashes frontman Cameron Charters does absolute justice to the legend that is David Bowie.

Charters has had much experience in ‘covering’ the work of great acts, having delivered a dandy Paul McCartney in his career, as well as having been a member of a new-age ‘ABBA’ of sorts, but with Bowie he had big shoes to fill, not only in having to emulate sheer greatness in talent, but because it’s still early days since the passing of the music legend, and – just in case things ventured a little into parody – certain fans may not appreciate the irony.

But as far as I could tell, everybody who left the Astor after the Ashes to Ashes tribute concert was beaming with delight. The only critique I heard from a couple of the punters was that the tribute could have included a few songs from Bowie’s latter-day work, ie: even one or two songs from his Heathen or Earthling or Outside albums.

The majority of the bigger hits were included, of course, and Charters and Co delivered lyric by lyric, riff by riff with gusto, dignity and charm.

Audiences were treated to over two hours of Bowie favourite, brought to life with snapshots of the icon on the big screen and an interesting mashup of retro costuming.

Song highlights included a raucous rendition of Rebel Rebel, a touching deliveries of Starman and Life on Mars, and an awesome version of Golden Years, whose harmony sounded so close to the real Bowie’s, I had to ask Charters if any sampling was involved.

“No,” he insists, “there’s no sampling. Just the occasional ‘effects’ to make it all sound even more Bowie.” Hence the echo on Fame is simulated to perfection, the golden tonsils in the chorus of Golden Years are performed to a tee.

Even the mannerisms of Charters are spot-on for the most part.

“I’m definitely a musician before an actor,” he says, “but there is an element to the show of trying to portray the character as best I can. I’ve been watching a lot of videos to get the moves, even watching interviews to get his voice right for when I’m talking between songs. It’s all in the practise, you’ve just got to perfect the mimic.”

Indeed, I removed my spectacles a couple of times and squinted, and kind of thought I was seeing the actual Bowie up there, posturing and gesturing in ambiguous fashion.

“There are a few Bowie acts out there, but we aim to be the best,” Charters tells me in sum. And there, he and his band have succeeded big-time.  Antonino Tati

‘Ashes to Ashes’: the Bowie Tribute tour continues with dates in the following cities:

Adelaide: Thebarton Theatre on May 17

Penrith: Penrith Panthers on May 19

Newcastle: The Wests Group – New Lambton on May 20

Wollongong: Anita’s Theatre on May 21