I’d be feeling fairly dissonant right now if I were Ariana Grande. The 25-year-old singer and actress released a music video last night for her new single God Is A Woman, laden with biblical references and portraying the artist as an almighty goddess one minute and blatant sex object the next.

But what is concerning about Grande’s efforts in deconstructing notions of sex, gender, power and religion, is that it is delivered all so flippantly, as if she ‘s had someone in her ear, telling her the history of the world but condensing it into a couple of minutes and getting the poor girl confused.

The video certainly is slick when you consider its production value, with scenes shifting from computer-generated to gorgeously illustrated, but the haphazardly cut-and-pasted treatment of history (real or constructed) ends up looking like a high school decoupage project, despite the big dollars that have gone into it.

Sure, the clip is potent in its message of reversal of power (Ariana as Thor, Ariana as God giving birth to Eve), and sure it is kind of ‘right on’ in that Ariana keeps showing us there’s ‘power in the pussy’, but when she literally begins to finger an entire galaxy, meditates with her digits shaped like a vagina, and poses on all fours to look like her nipples are getting sucked by three tiny guys, I’d say she’s taking the feminist power thing a bit too far. To the point of potentially – and dangerously – turning it into a piss-take.

It brings to mind a quote Tori Amos once gave Cream:

“Let’s face it, there are some dirty girls that aren’t being very smart lately… Pouring out of expensive chauffeur-driven cars with their beavers exposed… falling out of their clothes… it’s not sexy. You have to wonder, why are you demeaning yourself? There’s a real difference between being desirable, and being desperate. I do think women can take on judgement – projected judgement on themselves – and wear it like clothing. And there can be confusion on what is sensual and what is vulgar.” 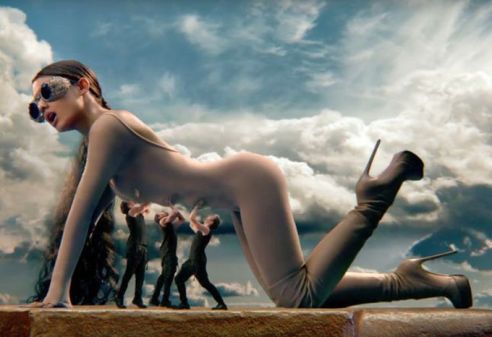 At 1:40 in the clip, a mole appears from out of the ground and starts to scream, causing a labour of moles behind it to begin making noise. If this is supposed to be some metaphor for more women to be motivated and speak out about sexism and subjectivity, Grande has picked the wrong animal to adopt as a mascot. I mean, come on… a mole, really?

What Ariana Grande’s video clip for God Is A Woman does do well is represent the frightening situation women and men have both found ourselves in, in the midst of the #MeToo and #TimesUp movements. During this tables-are-turning phase, we’re all wondering just how are women and men supposed to behave during times of courtship and come-on? Is being subtly sexy too sexy or not sexy enough? Is being blatantly sexual, with tits out and fingers poking into cavities too much?

Or maybe I’m just making a mountain out of a mole-hill here. Perhaps Ariana and her clip are simply “dumb”, “fake” and “annoying”, just like the words her haters are hurling at her 50 seconds in.

I’ll have to ponder that one until the avalanche of copycat clips comes crashing through the web by the likes of Nicki Minaj, Katy Perry et al, making the next generation of girls growing into women even more confused about feminism vs femininity, and while their male counterparts grow just as bewildered. Antonino Tati