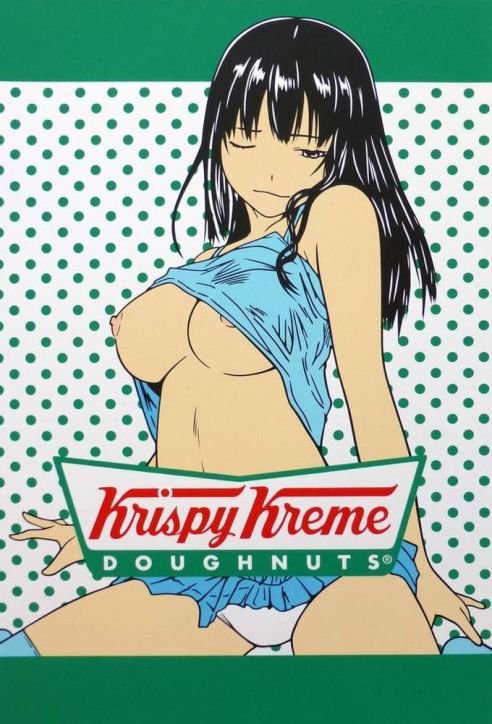 A couple of weeks ago, I shared a link on Facebook of an image originally posted by street artist Ben Frost. It contained a cartoon drawing of a heterosexual couple doing ‘it’ but with only a small part of the breasts of the illustrated woman showing. The greater twist was that the image had been stenciled on a McDonald’s ‘Family Pack’ carton.

Within minutes the image had been deleted, and any comments from friends suddenly made no sense as there was no picture to refer to. Facebook had taken the initiative to deem a cartoon drawing ‘too crude’ for public consumption, even if said illustration was about as safe as half the Manga and Anime witnessed in Japanese comic books. Indeed, the Krispy Kreme pastiche cartoon, above, and also by Ben Frost, would seem cheekier, as would half the hip-hop videos available to view on YouTube.

The deletions and general crackdown are part of an initiative that the social network intends on seeing getting even stricter with, according to Monica Bickert, Facebook’s ‘Head of Global Policy Management’.

Bickert spoke this week about measures Facebook was taking to make the platform “safer”, “more inclusive” and “generally better managed”, with the social media giant on a rampage to stamp out bullying, harassment, and what it considers unsavoury content.

While we agree that there’s no place online for bullying and harassment and that Bickert’s reference to Facebook as “the world’s largest neighbourhood watch program” is pretty cool, we do draw the line at Facebook deleting pretty harmless cartoons.

As mentioned, the image initially posted by Ben Frost didn’t even show the cartoon couple’s genitals, only a small part of the illustrated female character’s breasts. A teen would have seen a lot more in a scientific book on the human anatomy or again, a heck of a lot more in pop culture on the internet.

And that is perhaps where the problem and solution both lay. If Facebook wants to keep its credibility and for the sake of allowing art to have some kind of presence on social media, perhaps it needs to have an age limit on who has access to the platform? It might mean seeing potential Facebook users forced to show ID as proof of age (eg: 18 or over). Or, even better, divide the social platform up into age-appropriate sites: Facebook Blue for up to age 18; Facebook Red for 18 years and older.

Of course this would make a mess of the media giant’s already carefully constructed platform, and while it is nothing for Facebook to remove millions of fake accounts, it’s another thing to suddenly ask its billions of users to show their ID as proof of age (users are already unhappy with Facebook’s intervening on their privacy while the site is losing much of its youth share to alternative platforms and apps).

While Facebook employs some 15,000 reviewers worldwide who manually sieve through mal-reported content, Bickert agrees that defining the ‘explicitness’ of certain content is an incredibly challenging task. In particular, Bickert gave the example of images of women’s breasts, saying: “We know that for topless images of women, there are safety risks. We’ve seen teenagers like Amanda Todd, a young woman from Canada, take her own life after people took a topless image of her and shared it around the internet.”

Bickert then turned the subject to the political connotations of breast visibility:

“We also know there are situations where women want to protest topless for a political purpose or share breastfeeding photos or for cancer awareness; how do we allow those but not create safety risks?”

A very good question, and one that’s going to take a while to answer, be it with reference to real breasts or cartoon ones.  Antonino Tati