It’s kind of ironic that an artist whose work is reliant on plagiarising images and turning these into sellable readymades is now suing others who are copying his artwork.

Indeed, Banksy once said that “copyright is for losers” and yet last month the artist (or at least his lawyer) appeared in court, suing an Italian art gallery for breach of copyright.

An Italian company hosting the exhibition ‘The art of Banksy: a visual protest’ in Milan’s Mudec Museum decided to take it upon itself to create merchandising to promote the show, along with merch to sell in the gift shop, all without official permission.

While the works on display were original, or at the very least signed prints, the organisers were also selling products such as postcards, notebooks, diaries, and even erasers, all of which were stamped with Banksy’s art.

The exhibition, which opened last November, will continue to run until April this year, however Banksy’s copyright agency, Pest Control, took action against the Italian curators, suing them for using the artist’s intellectual property without permission… and winning.

[Official charges] would mean the artist would have to reveal his real name and persona, the current ambiguity of which is part of the appeal of his work. 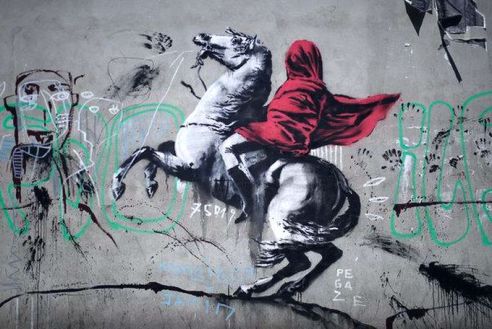 Funnily enough, Banksy artworks have been copied for ages, sold cheaply along London tourist avenues such along Camden and Brick Lanes, while Banksy rip-offs appear online in the form of everything from mugs to mouse mats to wall murals, and yet no legal claims appear to have been made and won in these areas.

In the Italian case, Pest Control has decided not to enforce Banksy’s copyright (ie: not to officially charge the exhibit organisers) which is no real surprise since this would mean the artist would have to reveal his real name and persona, the current ambiguity of which is part of the appeal of his work.

It would also likely reduce the value of his art.

You see, karma works in mysterious ways, even in art circles…