While the Oscars are meant to be a celebration focusing on actors, it seems the main star of this year’s ceremony was musician-come-actor Lady Gaga. Not only was Gaga’s performance with Bradley Cooper the talk of the internets yesterday but by the end of the night, another event took place that has left fans agasp. 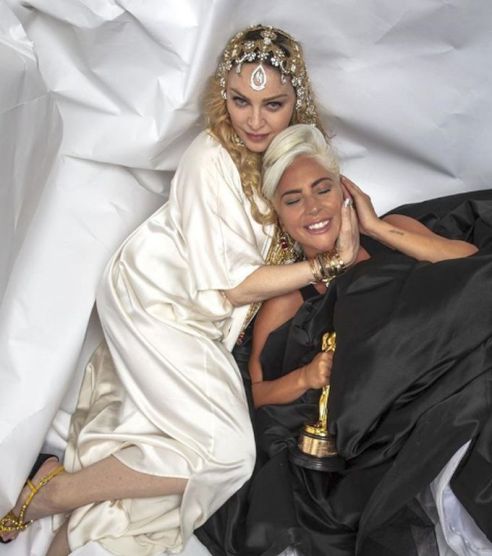 Madonna, you see, hosts an Oscars after-party every year – whether she is invited to the prestigious event or not – and, following Gaga’s win, invited her one-time nemesis over for bubbles and disco.

Surprisingly Gaga said yes (as if she didn’t have half a dozen other fab events to go to) and before you know it, the pair were photographed cosying up together, looking like finally having buried the hatchet.

The two pop stars’ fighting goes back over a decade, with Madonna previously claiming that Gaga’s work is “reductive” (ie: a rip-off of her music).

Now, besides both being mega pop stars, Madonna and Gaga have something else in common: both have been snubbed for major awards at the Oscars. Madonna had won a Golden Globe for her performance in Evita eons ago, but was ignored at the Oscars, while Gaga looked pipped to win more this year than just Best Song. Perhaps it’s this sudden common discovery that drew the gals together last night.

The photo was officially taken by a Time magazine photographer, but of course it’s already going gangbusters on the world wide interwebs.

Another duet, anyone? Pity the song title Shallow has already been taken…