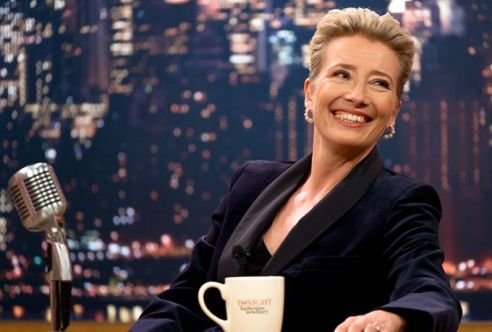 The ever-watchable and talented Emma Thompson plays a haughty late night talk show host having amassed many awards over 10 years of being on air. The show’s ratings are in decline as she is losing touch with the younger generation, hence is threatened by the network that this is her last season. Holding on to traditional late night formula, led by a homogenised white male writing team, Katherine is urgently in need of new ideas. Enter Molly (Mindy Kaling), a young writer with not much experience in television but her finger firmly on the pulse of the here and now.

There are many modern social messages about male domination and misogyny, racial discrimination, and being brave enough to reveal your true self.

While Molly may have been employed as a “diversity hire” to meet Katherine’s attempt to modernise to a more politically correct team, she rattles the brotherhood of the stale all-male privileged writing team with her honest, albeit sometimes too honest, no-holds-barred approach. Molly’s female perspective speaks to Katherine who is ruthless and quick to fire ‘dead wood’, but Molly’s out-of-the-box ideas wins her over, which makes for entertaining scenes as the two make a dynamic pair. The battle between Katherine’s steely and fearful command and Molly’s enthusiasm results in new life breathed into the show, turning everything upside down with unexpected consequences.

Emma Thompson works every angle of her character from cold and detached – with masculine assertiveness – to warm human frailty with relatable flaws, gaining compassion from the audience. The relationship between Katherine and her ill husband Walter (a superbly cast John Lithgow) who shows admirable unconditional support is easily one of the most interesting gender role reversals holding great significance to Katherine’s character growth and giving the film heart and soul.

Kaling – who comes from Indian heritage – experienced her own minority group discrimination in a white male-dominated entertainment industry as the writer for ‘The Office’.

There are many modern social messages about male domination and misogyny, racial discrimination, and being brave enough to reveal your true self. There are funny moments to lighten the drama such as Katherine taking the ‘piss’ out of a vacuous YouTube starlet involving a dog, say no more. A male stand-up comedian who is Katherine’s nemesis is easy to despise with his vulgar female put-downs and there are some affable office dalliances to make for easy viewing.

Directed by Nisha Ganatra and written by Kaling (who had Emma Thompson in mind), the script is art imitating life somewhat as Kaling – who comes from Indian heritage – experienced her own minority group discrimination in a white male-dominated entertainment industry as the writer for The Office.

Late Night is a winner with Emma Thompson at the helm, who is a natural comedian who easily carries the film while most of the other cast members are relatively unknown, and that kinda works to its advantage. Late Night is an enjoyable authentic comedy with a heart that won’t let you down.

‘Late Night’ is in cinemas now.