Despite the obvious marketing seen around town of musical production The Book of Mormon – billboards, the sides of buses, the back of taxis – you ought to have been fairly familiar with the show’s name for some time.

Indeed, The Book of Mormon, which debuted on Broadway in 2011, has gone on to win countless Tony Awards, Critics Circle Awards, even Grammy Awards, and helped put the names Matt Stone and Trey Parker on the mainstream map.

In case you’ve been living under a rock, Stone and Parker were the comic geniuses behind satirical cartoon series South Park, and while The Book of Mormon might register religious connotations, it very much veers in the same diabolic direction as South Park.

The cheeky vibe of the production is also reminiscent of the radical sense felt when viewing Avenue Q – another musical penned by Parker and Stone but, like South Park, dealing with animated characters rather than real-life folk. This familiarity might also be due to the writing credits on Mormon and Q being shared with funny-man Robert Lopez (also of TV’s Scrubs fame).

While some of the references to subjects such as rape and AIDS may seem too delicate to turn into slapstick, after a few jokes you realise casual enlightenment through desensitisation is better than tight-lipped denial.

To the story: The Book of Mormon follows the antics of two new recruits into the Mormon religion. Young missionary Elder Price – an ambitious go-getter with a strong dedication to his faith – is paired up with Elder Cunningham – more of a socially awkward but well-meaning nerd – and the two are sent on a mission to Africa with the purpose of recruiting new followers.

On their journey they encounter a haphazard society plagued by poverty, sexism, violence and AIDS, and realise their mission ain’t gonna be an easy one. But just as the characters deal with the drama and danger through song and dance, the audience copes with said subjects by going along for the crazy ride.

While some of the references to delicate subjects such as rape and AIDS may at first seem too delicate to turn into slapstick (sometimes you’d think the writers were disrespecting the seriousness of them), after a few jokes you realise casual enlightenment through desensitisation is far better than tight-lipped denial of these themes. It’s like talking about elephants in the room without the shame, and with joy and acceptance in its place. So as to ease the pain, if you will. 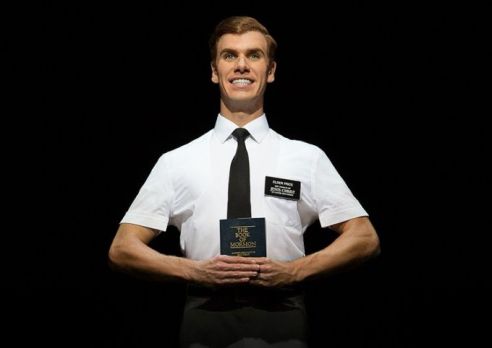 Every actor on-stage does a dandy good job balancing the serious/comedic tight-rope, and lead actors Blake Bowden (Elder Price) and Nyk Bielak (Elder Cunningham) do a particularly brilliant job tackling a massively saturated script. That said, the laugh-out-loud moments are non-stop, leaving you begging for breath by the end of it all.

While The Book of Mormon‘s themes are dark and dangerous, in the end this is a show about acceptance and love. And that is the biggest feelgood asset you’ll take away from this gig.

‘The Book of Mormon’ is on at Crown Theatre, Perth.

Tickets are available through www.crownperth.com or on 136 100.