The extended bushfire crisis in Australia has seen at least 28 lives lost, more than 2,000 homes destroyed, billions of animals killed, and around 11 million hectares of Australia’s pristine bushland razed. It’s no wonder so many celebrities and big brand companies have been chipping in millions to raise funds for assistance and repair.

Shouts out, too, to all the musicians who’ve been putting on damn good shows for a damn good cause, also contributing to the relief effort.

Now, TEG Dainty is set to present a spectacular lineup of artists to perform at a major concert being dubbed ‘Fire Fight Australia’. The big gig will be staged on Sunday 16 February 2020 at ANZ Stadium in Sydney, with ticket proceeds going to the National Bushfire Relief.

Hosting the event will be comedian Celeste Barber, who has already raised more than $50 million towards bushfire relief through her own record-breaking online appeal.
Global rock legends Queen + Adam Lambert will take a short break from their Australian ‘The Rhapsody Tour’ to grace the stage in Sydney for a second time in the wake of their sold out ANZ Stadium performance the night before to perform a special set.

The nine+ hour concert will offer revellers a unique opportunity to witness some of the most influential and successful songwriters of all time, all on the one stage and in the name of National Bushfire Relief.

Tickets go on sale at 12 noon (AEDT) today at www.ticketek.com.au and are priced at $100, $85 and $70 with an option to make further contributions to bushfire relief during purchase. 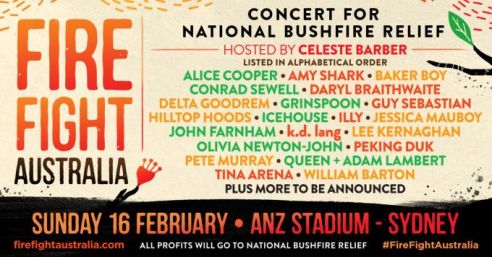