Ex-One Direction singer Harry Styles is featured on the cover of this month’s Vogue wearing – shock, horror – a dress.

I mean, seriously, what the fuck is the big deal?

Pop stars and rock icons have been flirting with gender dress codes since forever, and everybody from Marc Bolan to Elton John, David Bowie to Kurt Cobain, and Freddie Mercury to Adam Lambert, have fooled around with the gender thing.

But 26-year-old Styles frollicking in a field in a frock is apparently a big deal… to conservative types, at least.

Conservative US commentator Candace Owens tweeted in relation to the images, saying, “There is no society that can survive without strong men. The East knows this. In the west, the steady feminisation of our men at the same time that Marxism is being taught to our children is not a coincidence. It is an outright attack. Bring back manly men.”

Naturally, Owens is a friend of Donald Trump’s. 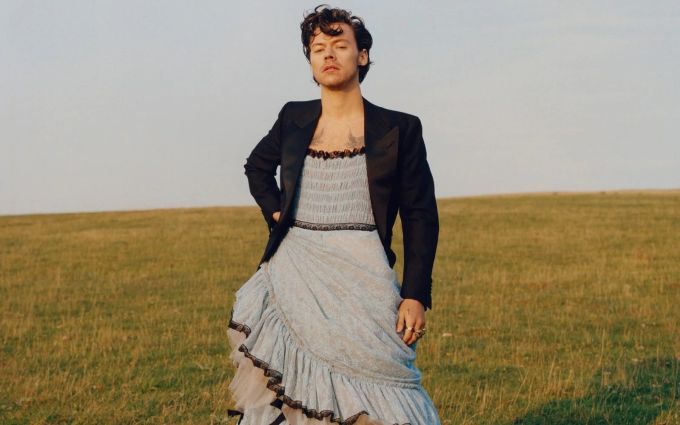 Ben Shapiro, another conservative commentator, has sided with Owens’ rant, saying in a Tweet, “Anyone who pretends this is not a referendum on masculinity for men to don floofy dresses is treating you like a full-on idiot.”

Seriously, “floofy”? Is that even a word?

Others, outside of politics, have critiqued whether Styles is simply “queerbaiting” – giving the impression he is gay without actually coming out or simply pillaging from LGBTQI culture to come across as on point (and therefore selling more crap music).

In an article published “Harry Styles’ Vogue Cover May Be Historic But It Isn’t Radical”, a Daily Beast writer insists that “of course, the sight of a famous man in a dress is hardly new and not transgressive, at least when it comes to the world of high fashion. Vogue knows this, and cited moments where male musicians ever-so-gently tiptoed across gender binary lines“.

Personally, we’re all for the blurring of gender lines – Cream has been featuring cross-gender fashion in its pages for ages, always ready to deconstruct gender stereotypes. But in this particular case, we think Styles looks like a real try-hard dick.