Children’s learning is a massive industry, with the choice of educational books so superfluous, there isn’t enough retail space to display every title (but thank you Amazon for the warehouse space and, hello, eBook!).

I can recall only a handful of books from when I was kid: the Dick & Dora picture book series, all of Dr. Seuss’s twisted titles, and Eric Carle’s The Very Hungry Caterpillar. Now, parents and teachers are absolutely spoilt for choice; or very much overwhelmed, depending on how you look at it.

I didn’t realise there would be potential for cross-platform branding in childhood education. Not before Vegemite thought of it, anyway. Now, the Aussie brand has just released its own line of board books, the Learn With Vegemite series.

The central character in the series is a brown puppy dog named Vegemite who peppers the pages of Colours, ABC, 123, and Opposites, to teach kids about colours, letters, numbers and antonymic words, respectively.

Vegemite the dog also does a dandy good job in advertising the brand, and rather blatantly.

The very first page of Colours features the puppy sticking his paws into a jar of Vegemite, then leaving tracks of the black stuff all over the house. The book also gives priority space to the hues that make up the Vegemite brand: black, yellow and red. 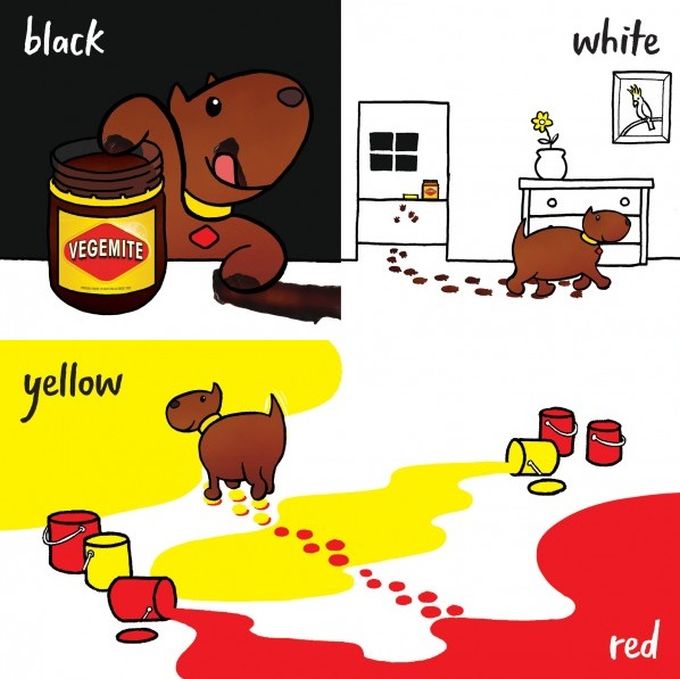 The brand also gets an obvious plug under ‘V’ in the ABC book, and it has stamped an image of a jar of Vegemite on the back of each title.

While all this appear to be a cunning marketing exercise to get children familiar with a product they’re sure to recognise in their parents’ pantries, the content itself is somewhat less crafty, with choices of Australiana already seen aplenty in classic children’s books. But it is kids they’re educating here, so I guess the obvious ‘A’ for Australia to ‘Z’ for zinc cream might be expected.

I did learn one new word: Xanthorrhoea, which is a grass tree found in the outback and outer suburbs. Perhaps the authors thought the word ‘Xenophobic’ – with an illustration of Pauline Hanson – might have been too much for the little ‘uns to take in.

Marketing tactics aside, this is a fun, bright and fairly harmless series that I’d recommend to friends who are parents.

Much like a puppy, board book readers are curious about the world around them, easily excitable, and have the attention span of well, a two-year-old. And for this reason, the Vegemite kids book series is best invested in if you have two- and three-year-olds.

The ‘Learn With Vegemite’ series is published through New Holland Publishers, RRP $15.99 for each book.