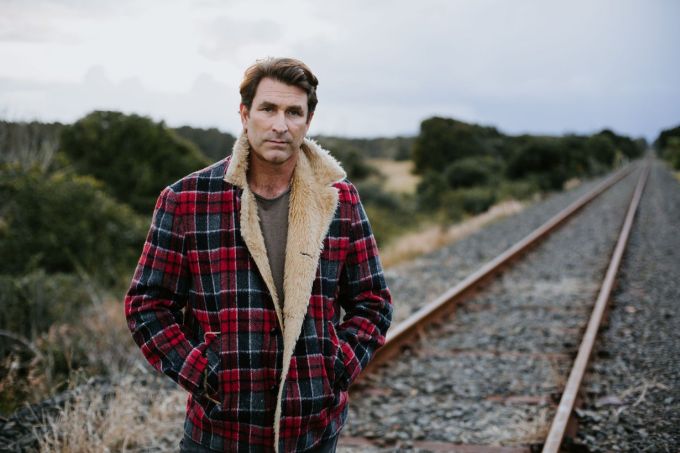 Born in the quaintly-named town Chinchilla in Queensland, Pete Murray was destined to become something of a sportsman – excelling in rugby, athletics and even swimming. Meanwhile, the arts took a back seat in high school.

It’s nice to get positive feedback when you’ve put a lot of time and effort into a recording, so thanks. With my recording process, I do find albums come together organically. I tend to write about 20 songs that I’m happy with and then record about 15 of the songs that then get cut down to 10 or 12 for an album. The songs that make the final album have to have a similar vibe, so it flows. My goal is to have this EP followed by another EP which I then put together as an album.

How long was the process of writing and recording the EP?

I began writing about two years ago. In the past, I’ve always written my own songs but this time I went on a trip to LA, Nashville and England to do some co-writing. I found this experience really rewarding and wrote with some amazing writers. Even before this writing trip, I was writing and demoing more of my own songs. I normally take my time with the demoing as this is all preproduction before you do the final versions. The songs also need time to sit… You know, so that the tempo, arrangements and structure are all good.

The opening line in ‘Found My Place’ reads ‘Life is a long, winding road but there’ll be many roadblocks ahead’. Often your songs begin with a somewhat melancholic sentiment but end in hope. Is that the job of the contemporary singer-songwriter; to bring a positive spin on the sadder things in life?

I can only speak about my songwriting, not others, so for me I like motivating people through my songs. I am a positive person and I’ve always believed that you can achieve anything in life if you really put your mind to it and believe in yourself. Some of my songs have been very inspiring in helping people change their life and have also helped them through hard times. I’ve also had feedback where my songs have saved people’s lives. I don’t think there is any greater feedback than that in the world; when you hear that your own song or lyrics have saved a life.

My partner was just listening to parts of your new record and said ‘Pete is definitely a great poet’. Do you consider your songwriting to be poetry or narrative?

I have been told by some people that I am a poet although personally I don’t consider myself one. I feel my particular songwriting style is a combination of both poetry and narrative.

Is there a difference?

I believe that depends on what you write about. When poetry is abstract and there is no narrative, then they are different.

On the subject of poetry, I’ve noticed a lot more artists are releasing books of poems of late – taking their cues from the classics like Nick Cave and Patti Smith and other contemporary artists like Lana Del Ray and Halsey. Do you think the Covid lockdowns have had something to do with this – a lot more writing instead of touring?

We all inspire each other and artists like Nick Cave and Patti Smith are very inspirational so it wouldn’t surprise me that other artists have followed them down that path. Covid has definitely given people time to make a change in their life and I know a lot of artists have spent more time writing and recording. I’m sure we’ll see an increase in art and poetry and music over the next year.

Has the pandemic hindered your artistic output in any way?

No, it hasn’t. It has definitely given me time to et this new recording finished. And having extra time to get videos done is a blessing in disguise. Visual art is the hardest thing to get the way you want it, and as we’re always working to a timeline, things can get rushed. There’s been less rushing this time around which has been fantastic!

You’ve had three albums reach number 1 on the Australian (ARIA) charts already. Does chart performance have any bearing on future work – do you feel you need to make records for the sake of them reaching the top of the charts?

I pay no attention to charts and awards. All I care about is that I still have a future in music in the years to come. In 20 to 30 years’ time I’d much rather still be playing to large crowds and hearing them sing my lyrics back to me, than be telling people how many number one albums I had or how many awards I won while having a career that died years ago.

Right answer. Do you have a Pete Murray song that best represents you personally?

Feeler seems to be the song that best represents me. It’s starts with a rootsy acoustic groove, has smooth vocals with positive lyrics, and then turns into an epic rock sing-a-long outro. All of the styles I love in music.

What is the absolute driving force for you to make music?

Lifestyle! My Dad died at 47 and I had just turned 18 at the time. Dad was just about to semi-retire and he and my Mum had bought themselves a caravan and were about to travel around Australia. Sadly, he passed away from a heart attack a few months before they were about to leave. Seeing this made me say to myself that I wanted to enjoy my life and not be wasting time doing something I didn’t want to do. I wanted a job that would allow me to travel the world and have time to spend with my family and friends. I found it.

During your college years, you showed talent in sports – namely rugby union, athletics and swimming. Have you kept up any of the physical stuff?

I still train really hard today, and I still like outdoor activities. I enjoy being fit but my knees aren’t the greatest anymore due to some old rugby injuries, so I prefer surfing to running these days.

What do you think of the fact a lot of your fans think of you as a bit of a sex symbol?

Ha! It doesn’t bother me at all. I guess it’s better than being bald and overweight. Apologies to all the overweight bald dudes out there!

Desert Island Discs time… What five favourite albums would you have to have with you if you were stuck on a deserted island?

Pete Murray’s new EP ‘The Night’ is out through Sony Music and now available to download.