How does a film speak to you? Through its characters, for sure. Heroes, intercessors, cunning villains… the way they use language is essential. The good guys usually spout some idealistic form of justice while their opposites are sharp talkers who goad and threaten violence. But what if the two most important main characters are inhibited by this skill – are mute to the common tongues of man? They become defined by other means of expression: through how they act and react to others and the world around them. This is a core theme that runs throughout the monster movie, The Shape of Water.

Director Guillermo del Toro creates a fantastical, character-driven period film that lives and breathes its own wondrous monster lore. Set in 1960s America, it centres around a mysterious water-dwelling creature that is captured in South America and brought back to Baltimore for scientific study. Rumoured to have been worshiped as a ‘god’, the creature is locked in a research chamber by lesser minds and is treated the same way people treat anything they fear: by breaking, beating and torturing the thing into submission. Soon the creature is revealed to be destined for destruction, something one of the key scientists, Dr Hoffstetler, strongly opposes as he claims it possesses intelligence and responds to language and music. Yet the doctor is not the only one to have noticed this. A humble, mute facility cleaner discovers the existence of the creature. Elisa instantly becomes enamoured with him and soon the two develop a bond despite not being able to converse verbally. 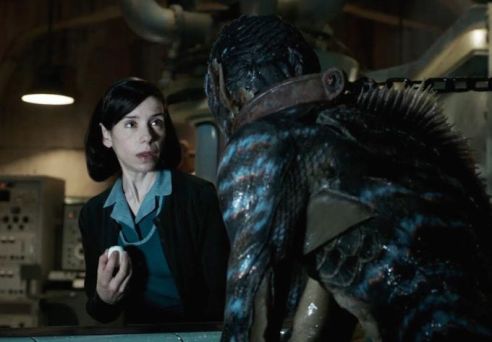 This is what makes this film truly enduring and beautiful: it is a love story between two beings from vastly different worlds, that learn to see and love each other how they really are. There is enough rage and ruin to keep up the pace of action, with Michael Shannon playing a vile, hate-fuelled sadist, and the added backdrop of some Russian espionage and American secret-stealing. But above all of this, The Shape of Water has an ensnaring charm that speaks with great humanity and thrilling suspense. It also achieves something quite rare for modern fantasy films – moving some viewers to tears. And for a film to be able to outdo the many loud, tentpole action flicks and still stay true to its vision while also delivering such raw emotion – that makes it a fine example of cinema.  J.K.A. Short

‘The Shape of Water’ is in cinemas now.