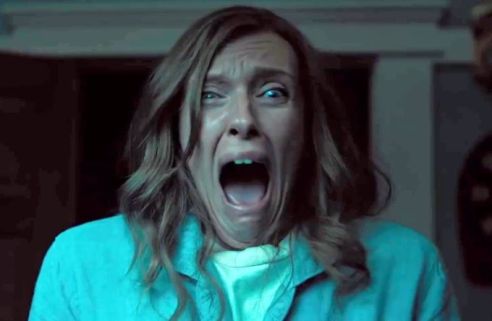 Some horror films are somewhat long in the tooth – lots of suspense and little in the way of in-your-face fright. Think of the many movies by M. Night Shyamalan which ultimately lean away from horror and more toward thriller, thanks to all that ongoing suspense.

Then there are films filled to the brim with brutally horrific pop-ups – think the Saw franchise or Scream – but whose blood and gore oversaturate and undermine an okay storyline.

Hereditary is a movie that cleverly combines the better elements of both styles of horror. Its first two-thirds lurk like an arthouse thriller – revealing the odd behaviours, bit by bit, of a rural-living family of four whose elder matriarch has just died, but then in the final act it is hurling horror and the bizarre all the way through to its awesomely deranged finale.

Toni Collette stars as Annie, a crafty woman in the literal sense, and quite possibly figuratively. For a job, Annie creates miniature properties, paying explicit attention-to-detail to the tiny figurines and furnishings in her little self-made model homes, schools and hospitals. Meanwhile, she’s kind of neglecting her real family and household. Add to this the fact that her estranged mentally ill mother has just died, and you figure this woman may be on her way toward horrible territory.

Her husband Steve (Gabriel Byrne) is of no real help as he neither appears to hold a strong position at work nor any real patriarchal clout.

It’s no surprise their offspring consist of teenage son Peter (Alex Wolff) who drearily plods through life like some post-millennium Donnie Darko, and 13-year-old daughter Charlie (Milly Shapiro) who possesses a strange tick (or tock, as the case may be) and is about as whacked as her mother but less expressive (spookily).

When a horrific incident leads to the death of one of the children, shit starts to get real crazy.

Packed with freak accidents and grave desecrations, decapitated heads and rotting corpses, and bouncing about the full spectrum of horror – from gore to the paranormal to the occultish to mental anguish – Hereditary has just about every aspect of the genre covered. Except for one thing: that cozy feeling in the end that the bad guy has been found out.

Through all its bizarro scenarios, the film has you wondering what all this schizo-chaos might be due to. Possession? Witchcraft? Or just impure imagination (ie: could all of this nightmare be in one kid’s head?). Then, because of its open-endedness, it’s difficult to decipher who the evil protagonist ultimately is.

Well, we’ve kind of worked it out, but we wouldn’t want to spoil it for you…

Suffice to say, if you’re going to see just one horror film this year, make sure it’s Hereditary. It does, after all, have everything we love about horror covered.

Sure, some viewers will think Collette and Byrne have entered glossed-up ‘B-grade’ territory here, but each actor adds a certain gravitas to a genre of film that up until now hasn’t been taken very seriously. And, while the feature length is long at two hours-plus, true horror fans will find patience is the best virtue to discovering some wickedly surprising Easter eggs.  Antonino Tati + Lisa Andrews

‘Hereditary’ is in cinemas now.