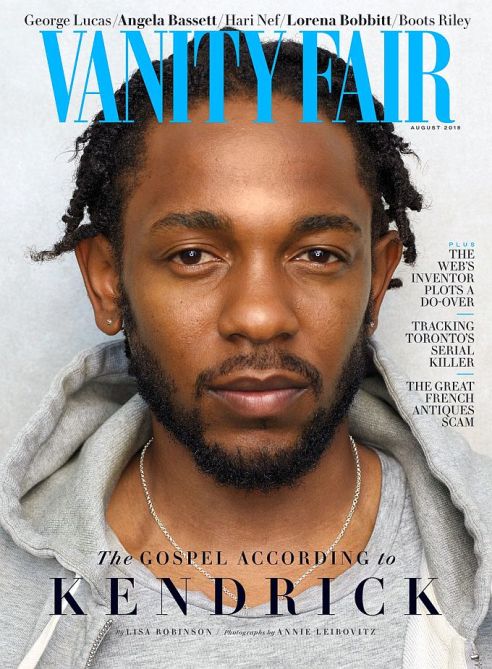 On the eve of his Australian tour, Kendrick Lamar features on the cover of the August issue of Vanity Fair, with the cover line ‘The Gospel According to Kendrick’.

The interview itself doesn’t break down too many walls – pretty much just going through a now-familiar rags-to-riches story. But with Lamar, the rapping is different. Yes indeed, this here artist has won himself a Pulitzer Prize.

Hence the most interesting question the journalist asks in the piece is ironically the most obvious; how does the artist write?

Oddly enough, Lamar reveals that his favourite word is ‘execution’, but before you think he’s using the term in an off-with-his-head context, what he really means is the manner in which he delivers lyrics.

“‘Execution’ is my favourite word,” tells Lamar. “My other favourite word is ‘discipline’… I spend 80 percent of my time thinking about how I’m going to execute, and that might be a whole year of constantly jotting down ideas, figuring out how I’m going to convey these words to a person to connect to it. What is this word that means this, how did it get here and why did it go there and how can I bring it back there? Then, the lyrics are easy.”

Lamar then reveals his admiration for Eminem.

“Eminem is probably one of the best wordsmiths ever. The Marshall Mathers LP changed my life. There’s a whole list of … bending words [and] he switches up his flow every few bars so it’s more interesting to listen to.”

Kendrick Lamar’s Australian ‘Damn’ tour kicks off in Perth next Tuesday 21 July. Lamar’s Sydney and Melbourne arena gigs sold-out in less than an hour after going on sale in April, with resale site Viagogo since flooded with tickets going for between $230 and $1,400 each.  Antonino Tati