Often we see comic books grow in popularity and then adapted for the big screen, Rarely does the opposite occur, where a screenplay is morphed into a comic book. But that’s just what’s happened with William Gibson’s Alien 3, which, while left on the cutting room floor, has now been picked up, dusted off, and given a comic book reworking.

Actually, a raw form of the story was initially published by Dark Horse Comics back in the 1980s but since then the original story has been extrapolated on… ten-fold, meticulously drawn and painted by artists Johnnie Christmas and Tamra Bonvillain (gotta love those pseudonyms).

Not to be confused with the Alien3 that did make it the big screen that shared its writing credits with David Giler, Walter Hill and Larry Ferguson, Gibson’s version was initially discarded by he himself as a hack story about “space commies hijack[ing] alien eggs: big problem in Mallworld.”

“One of the reasons Gibson’s ‘Alien 3’ didn’t make it to commercial screens is because the script hadn’t even been completed.”

Gibson’s Alien 3 takes place immediately after the events of Aliens, where protagonist Ripley and sidekicks Hicks, Newt and Bishop are captured by a group known as ‘The Union of Progressive People’, then lifted up to a space station called Anchorpoint. Here they discover a shoddy secret arms race being developed that is churning out vicious xenomorphs, hence a Cold War-style battle begins between our heroes and the baddies. Well, that was the basic plot of the film that was to be, but we won’t spoil the new, twisted sub-plots for you.

One of the reasons Gibson’s Alien 3 didn’t end up making it to commercial screens is because the script hadn’t even been completed, hence even the most ardent followers of the series won’t know what exactly is going to happen in this particular screenplay-to-comic translation.

One thing’s for sure, judging by the sneak peaks above and below, it’s going to be one heck of a creepy read.  Antonino Tati

William Gibson’s ‘Alien 3’ comics (five in total) will begin being published on November 7, 2018. 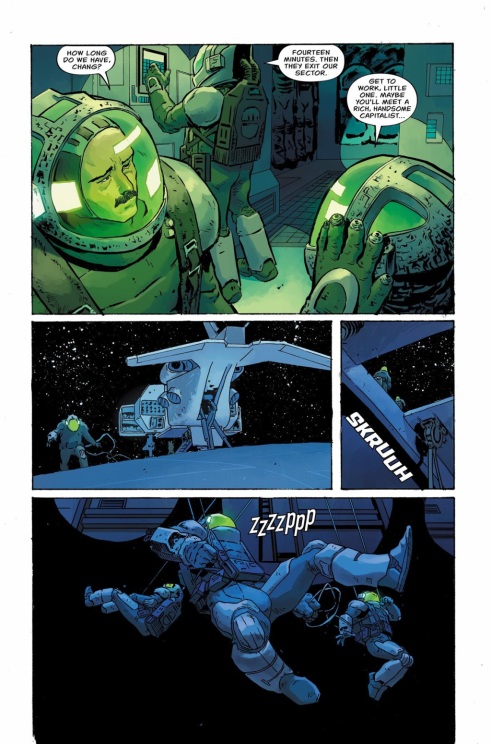