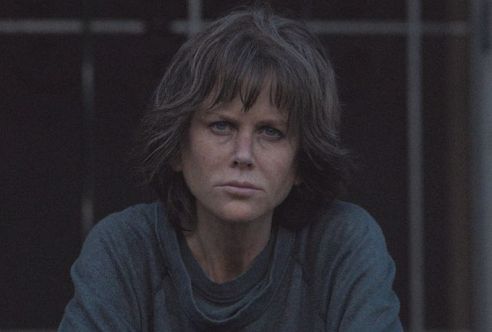 At 51 years of age in real life, Nicole Kidman looks pretty amazing but for her latest role in the movie Destroyer, in which she plays a down-and-out ex-cop, Nic’s face has gone through some major transformation to look weathered, tortured, some might say a little haggard…

In the film, Nic’s ex-detective Erin Bell is a tortured soul who has spent two decades punishing herself for playing a part in an undercover operation that went very wrong. The performance alone is apparently really intense.

As for her appearance, makeup artist Bill Corso explains that he set out to make Kidman “look like a real woman who’s had a hard life” but actually turned to images of ageing rock stars to achieve the look.

It’s no surprise if those bags under red-rimmed eyes and the weathered, wrinkled skin remind viewers of rockers who once partied hard, like Keith Richards, Robert Plant, Janis Joplin even…

Corso told Vanity Fair, “It was quite a bit of actual makeup, painting and making her skin look a little weathered like most people in their 50s that haven’t taken care of themselves,” Corso says. “It was like doing a portrait painting every day that has to match the day before; very challenging.”

Corso also applied a small prosthetic piece to change the shape of Nic’s nose so that it would look as though it had been broken. Which means she’s bound to get about as much talk – perhaps even an Oscar nod – for her new role as the last time she had her nose ‘fixed’, that is for her role as Virginia Woolf in The Hours.