I’m not a diehard outdoor adventurist. Once I had a ticket for a skydive stuck to my fridge for a full year. Too petrified to even think about jumping out of a plane, imagining dodgy parachutes and falling hard on rocky terrain. So the ticket tacked to my fridge expired after 365 days of vertigo-like pondering.
Since then, mind you, I’ve cracked the code to outdoor pursuits. It’s pretty much like the Nike slogan says: Just. Do. It.

Now I’m proud to have ticked a stack of stuff off the bucket-list: quad-biking through Johannesburg, zip-lining in Fiji, parasailing in Phuket, canoeing in the Hamilton Islands, even horseback riding around the coasts of various Vanuatu islands. Yep, pretty adventurous stuff.

I’m still afraid to jump out of a plane though, so I did the next best thing and booked an indoor skydiving session a year ago at iFLY Perth.

At least I knew that I’d have an instructor beside me and that there was a strong net below me which would break my fall should the giant vacuum blade above cease spinning rapidly. That slight scare only adds to the excitement of floating in an iFLY wind tunnel. It’s awesome. And awe-inspiring, in fact.

Recently I went back, but this time to experience the iFLY Virtual Reality experience. You suit up the usual way, looking like a hip astronaut, only with added VR goggles to throw you into any one of three magical destinations: skydiving over Hawaii beaches, base-jumping over Californian terrain, or skydiving over the snowy Swiss Alps. I picked California.

First, my instructor Harry gave me two warm-up rounds, each a minute or so of floating mid-air, practicing my limb moves (legs straighter for a little lift, bent for a more settled, balanced flight).

While it might feel like all eyes are on you, waiting for you to stuff up and flip over, it’s best to just go with the flow. Enter the tunnel with your arms darting straight into the air and fall into the ether. With the VR goggles on and the scene starting the moment you get to the entry point, it can feel a little shaky, but dive into it and you’ll have a wickedly fun experience. 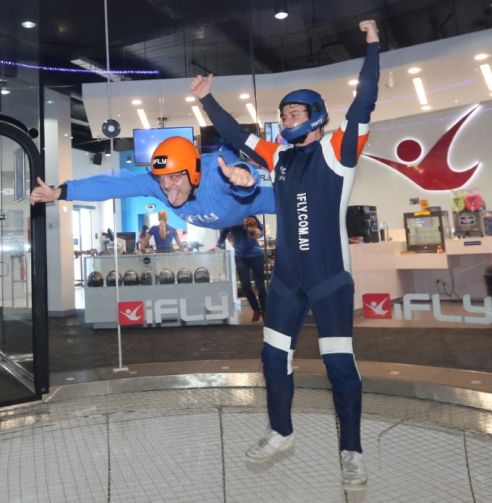 Happy as Larry: confident after a couple of practice go’s – hence the thumbs aloft!

For me the ‘fall’ felt like one of those ‘games of trust’ HR loves to put their staff through, but soon enough you’re in your own world, in my case dodging tall Californian palms, hilltops, and other ‘obstacles’ while imagining you’re really out there in the big sky.

Indoor skydiving caters to those who want to chase that feeling of flying, an adrenalin rush and letting go, all whilst having the peace of mind about actual altitude.

Says my instructor Harry, “We initially expected a lot of flailing around, however, like a skydive, many people get the feeling of letting go and becoming at peace with the sensation of flying. I’d say one in four flyers flail about and peak out, but they’re safe; we’ve got them. I do get a laugh when the occasional flyer ‘high fives’ the virtual skydivers in the video though!”

Indeed, the virtual experience really does add more depth to your flight. 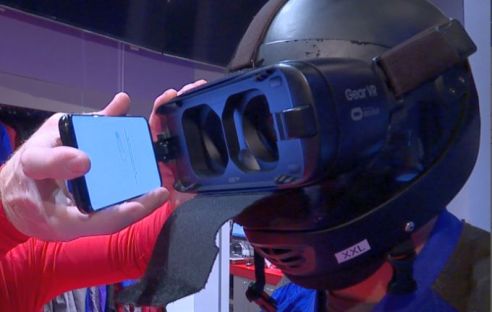 The virtual reality scenes are loaded into a smartphone that is then clicked into place at the front of your goggles.

Says Harry, “People flying for the first time get the sensation of flying from the get-go. Basically, you fly your body! You’re not strapped to anyone and your family and friends watching outside the tunnel are right there with you.”

Most people manage to float on their belly, but if you do have an imbalanced moment, and happen to flip around, don’t panic. Simply enjoy that trip and rest assured your instructor is there to help get you the normal way around.

Flight buddy Ben gets the gist of it quickly. And it was his first go!

Indoor skydiving caters to those who want to chase that feeling of flying, an adrenalin rush and letting go, all whilst having the peace of mind about actual altitude.

Whether I’ll ever get the courage to jump out of a plane and go real-life sky-diving, Harry has this to offer:

“We definitely want to create local scenarios,” he says. “Our Perth instructors are itching to jump over Jurien Bay, York, Rottnest, Busselton, and even Perth CBD.”

iFly also has centres in Sydney’s West and on the Gold Coast.

Get 20% off with iFLY Intro and iFLY Plus packages by simply using the code STAYCOOL when booking online!