Originating in 2004 when it debuted at Edinburgh Fringe, the show has been built on year on year and can currently boast some 7 million tickets sold. That’s big biccies in the business of fringe theatre, and is probably due to the production featuring such broad content: classic cabaret, nu-burlesque, aerial stunts, acrobatics, even doses of jazz and disco – for lovers of the old-school art-forms, each presented in postmodern neon glory.

Act upon act, ‘La Soiree’ builds into a circus of the absurd and the amazing.

Kicking off this year’s show are the Mumbai brothers, premiering in Australia as they effortlessly straddle a tall pole, mastering Bollywood style acrobatics-meets-dance. These guys have an unbelievable grasp on balance.

Then there’s familiar sexy magician Lily Martinez who has us asking again, “Where did that handkerchief go?” as her slippery bit of fabric keeps disappearing into crevices and reappearing out of nowhere (well, not really nowhere, we’ll just call them naughty bits).

Returning this year, too, is Montreal’s Cabaret Decadanse, those sassy and hilarious puppeteers whose divas are, quite literally, larger than life. 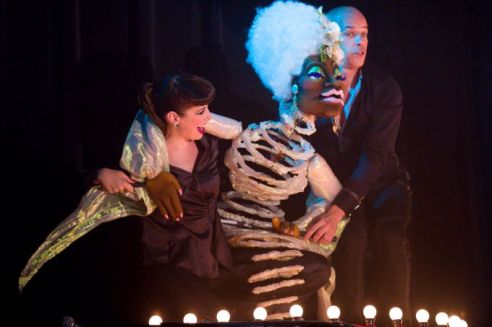 This year, La Soiree occasionally invites an outside performer on the Fringe program and, as luck would have it, we got to see splendid Swedish magician Charlie Caper (of Robotricks fame), who delighted with his cool brand of optical illusion. Somehow, just somehow, Lily’s slippery red hanky has made its way into Charlie’s act… but we’re not here to ask questions.

Act upon act, La Soiree builds into a circus of the absurd and the amazing. More daring artistry unfolds as stunning Ukranian Amazonian Irina Bessonova and her partner Vladimir Todorashko appear centre-stage as kind of gym equipment for each other; him climbing over her and so on…

High glamour sword swallowing has never been so close and personal, as local Perthite, Lucky Hell sassily reveals a glowing sword slid down her throat, as if it was er, um… a lollipop.

Next up, a few aerial acts courtesy of strapping beau Ben Lewis, followed by a powerful Chinese pole routine by Will Underwood. At times the performers move dangerously close to the perimeter of the small stage which challenges the concept of space itself. In fact, the circular centre-stage is only a couple of metres in diameter and proves less a matter of downsizing and more a matter of upping the risk factor.

Which leads us to our favourite act in a bunch of damn fine acts: the jaw-droppingly cute Fratelli Rossi, or ‘Rossi Brothers’ in Latin (pictured top of story), who thrill with their unique acrobatic stunts, not only seeing one bro precariously balancing on the heels of the other, but having him flipped over and over and over again. The sight becomes somewhat surreal and you begin to question if there are strings involved. But, no, this is indeed brute strength and precise choreography at work before your very eyes.

Kudos, too, to torchsong singer Carla Lippis who bookends a fantastic series of acts. In all, La Soiree is not too sinister nor too sexualised like some of the similar lineups in Fringe. What greater shows like this do is draw people in who may not otherwise go to Fringe and encourage them to sample other shows. It also guarantees a super-charged wild night out that’ll leave you in awe. ★★★★★

‘La Soiree’ is on at the Ice Cream Factory in Northbridge until March 3, 2019.