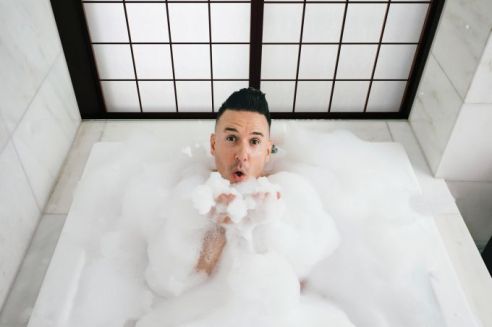 Talented pianist and accomplished singer Michael Griffiths loves his pop music, and he does a dandy good job in marrying it with cabaret.

Without the aid of drag – no costume, no wig, no song-and-dance routine – Griffiths focuses solely on the songs, and shines a light on  the best biographic bits of his favourite artists’ lives.

In your past shows, you have channelled the music and lyrics of Cole Porter, Annie Lennox, Peter Allen and Madonna. I’d imagine you’d have to be a huge fan of an artist to take on and reimagine their work. Do you take on aspects of their persona?

Yes I am a huge fan of all these artists. I think what makes my ‘tribute’ shows a little different is that I make no effort to impersonate or take on their persona; it’s more about finding where we meet in the middle. Certainly, I always sound and look like me but conviction is a powerful thing and I’m often told how I’ve perfectly captured an artist. It’s endlessly fascinating, the power of suggestion.

Your latest star incarnation is Kylie Minogue. Let’s clarify for the audience, do you do Kylie in drag or are you straight-up Michael delivering favourite Kylie songs?

It’s straight-up Michael. Even after performing in the musical Priscilla for two years, I simply cannot do drag. My nose is too big and my voice is decidedly deep and baritone. I simply assume the character of ‘Kylie’ for the sake of the storytelling and lots of humour and the audience comes along for the ride – although in my reality, Kylie plays the piano too! And, yes, it’s all my favourite songs and fond remembrances from her extraordinary career.

“I’ve been a massive Kylie fan since I came out as a teenager. She’s always been a safe space for me and intrinsically linked to my sexuality.”

How did you go about selecting particular songs for the show? Were there instant selections that just had to be in the set list, and what songs did you uhm-and-uh about?

I’ve been a massive Kylie fan since I came out as a teenager. She’s always been a safe space for me and intrinsically linked to my sexuality; kind of a modern day ‘friend of Dorothy’. I make no apologies that the show celebrates ‘my’ Kylie and favours the early days with the power of nostalgia. There’s certainly lots of Stock, Aitken and Waterman. They’re so fun! But I also love dropping in little surprises for fans, too, like ‘Bittersweet Goodbye’, ‘Disco Down’ and ‘Breathe’. The show was always going to start with ‘I Should Be So Lucky’ and finish with ‘Better The Devil You Know’; that was non-negotiable.

When an artist has a discography that is as big as Kylie’s (or Madonna’s or Annie Lennox’s, for that matter), an artist covering those songs may be tempted to throw in some medleys so as to tick more boxes. Do you have any medleys in your Kylie show?

I think it’s simply the practicality of honouring these massive careers in a one-hour show – without the device of a medley or a mashup, you’re bound to leave a few people unhappy about exclusions. And let’s be honest, Stock Aitken and Waterman in particular tend to play all their cards in the first verse and chorus, the songs don’t tend to ‘go’ anywhere so we’re happy to jump from one song to another.

Good point. Are some of the songs changed up or dramatically altered?

I’ve not messed around with songs structurally other than trimming them for a couple of medleys. I’d guess about half the songs in the show are done faithfully just as you remember them; you don’t mess with perfection! However, I’m a big fan of musical surprises and there’s some bold reimagining in this show I’m really proud of, in particular an INXS mashup with a Kylie song from the days of their romance which lets me channel my inner rock god. And ‘Can’t Get You Out Of My Head’ is stripped back with an acoustic guitar. That’s my favourite moment.

You won the Helpmann Award for Best Cabaret Performer in 2016. Do awards mean anything to you?

Awards never enter your mind when you are working on a show, there’s too much else to worry about. But if they come along, they are completely delightful and I am very grateful. Ultimately an audience in the ‘here and now’ is the real compliment, you know when you’ve won them over and you certainly know when you haven’t. [By the way, Michael won Perth Fringe World’s ‘Best Cabaret’ this week!

Some people may already know this, but you starred in stage musicals ‘Priscilla Queen of the Desert’, ‘We Will Rock You’ and ‘Shout!’ For you, personally, what do stage musicals provide that solo shows don’t?

Camaraderie with cast and crew – while the contract lasts – and a bit of financial security. I’ll always be grateful for years working in big shows because it’s where I learned my skills and how to behave backstage; and it taught me about respect for the theatre. Even working in a Spiegeltent, conditions aren’t really that much different, and respect for your audience and crew are paramount.

You’ve appeared at so many festivals and alternative venues around the world. Tell us some fab memories.

A New York Madonna tribute at 54 Below – with Caroline O’Connor in the audience, which was a career highlight. Singing Cole Porter songs at the Royal Albert Hall in London – on Elton John’s donated lipstick red piano. Camp. And Edinburgh Festival was hard work but it kickstarted my solo career.

And in one word, how would you describe Perth Fringe World 2019?