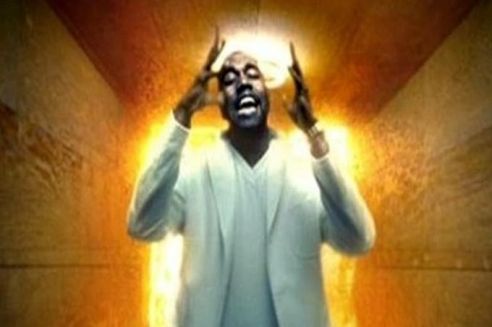 Kanye West has made two surprise announcements. One: that he is being added to the bill again for this year’s Coachella music festival. Two: that he will be bringing his gospel-inspired ‘Sunday Service’ to the festival during its second weekend, with a performance scheduled for Easter Sunday, April 21, at 9 a.m (PT).

West made the announcement at yesterday’s ‘Sunday Service’, which was later tweeted by Coachella festival organisers.

It isn’t the first time West has pushed religion onto his fans. His nickname of several years ago, Yeezy, alluded to the name ‘Jesus’, and he released a single in Jesus Walks for which he is seen rapping (well, preaching) in the video beneath a golden halo.

West has also been captured in a Christ-like portrait by pop culture photographer David Lachapelle.

Kanye was one of the first artists initially confirmed to play Coachella, but then pulled out in a supposed disagreement about staging (he thought the organisers weren’t providing him with enough space). West said he found the festival’s traditional 60×40-foot stage “artistically limiting”.

Also playing Coachella over the weekends of April 12 and 19 are Childish Gambino, Ariana Grande and Perth band Tame Impala.