Melbourne will be one of three cities to test and experience Uber’s new air taxi service, Uber Air.

The ride-sharing giant’s aerial arm – Uber Elevate – announced the news this week, saying that Melbourne will join Los Angeles and Dallas in pilot flights commencing in 2020.

The aerial taxi service will still involve using an app to book, but boarding would now take place at “skyports” on rooftops of nearby buildings.

The great news is, despite air travel usually having a costlier tag attached to it than, say, road or rail travel, Uber insists that a ride in their drone-looking machines won’t be sky-high. The company is hoping its electric aircraft will transport passengers across cities for – quote – “the same price as an UberX trip over the same distance”.

Now, there’s no doubt everyone is fed up with traffic these days, and Uber is insisting that part of its mission in launching Uber Air is to reduce traffic congestion on the ground. Kind of a positive move, we think… even if it doesn’t please the Sydney Morning Herald who view the service’s launch as a ‘move toward a ‘dystopian future’ (melodrama much?).

In an article published yesterday, the Herald slammed Uber for not paying much in taxes that might go toward road-building, adding that the ride-sharing giant will only create friction between those who can afford its aerial service and those who cannot. A case of pot-kettle-black, really, when you consider the Herald itself is no stranger to sidling up to government bodies to soften deals and land major tax breaks. And the publication might also want to look inward before criticising other businesses for lack of ethics and standards. We’ve all seen your social pages… 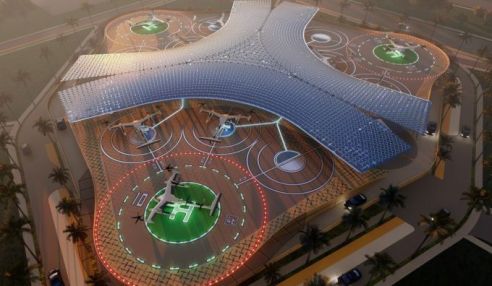 A proposed design for an Uber Elevate Skyport.

Anyway, back to the good news.

Uber’s aerial taxi service will still involve using an app to book, but boarding would now take place at “skyports” on rooftops of nearby buildings. Passengers will badge through a turnstile using their smartphones and will be weighed in to ensure they’re not too heavy for the weight-conscious air-taxis.

Yes, the future really is here.