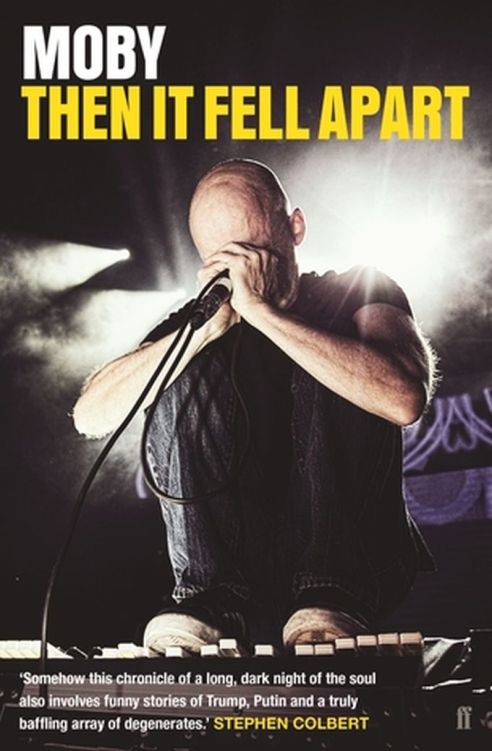 Moby has been in the celebrity game for several valid reasons. He’s occasionally voiced his opinion against bigotry (beginning with the Eminem homophobic thing from way back), expressed his anti-cruelty to animals stance (he’s a staunch vegan), and has made music that’s helped put many a stressed-out listener into a calmer state of mind.

But he’s also been in the game for all the wrong reasons: recogniton, validation, and, yes, that standard trio of sex, drugs and debauchery. You could say he’s been trying to balance Zen and the Art of Celebrity Maintenance for a couple of decades.

Still, between these dissonant forces, there’s been a certain sensitivity that permeates much of the artist’s music and a lot of his book-writing.

In between the latter-day tales of guilt-free decadence and consistent panic attacks are chapters about an innocent kid working his way through a wide-eyed life; one tainted with poverty, bullying and the occasional, horrible molestation.

Then It Fell Apart is the followup volume to Moby’s first memoir Porcelain – the first presumably a study – I’ve yet to read it – of how beautiful but delicate the pop life is in its early stages, the latter evidently about the brokenness of that beautiful thing. It is literally a warts-and-all (well, hangovers and all) account of Moby’s larger years in the limelight – bursting with stories of record-breaking record releases, excesses in drug-taking, and countless sexual conquests: basically the fruits of a once-was-struggling musician’s prior labour.

In between the latter-day tales of guilt-free decadence and consistent panic attacks are chapters about an innocent kid working his way through a wide-eyed life; one tainted with poverty, bullying and the occasional, horrible molestation.

Heavy stuff? Some of it. Entertaining and captivating? Pretty much all of it.

The writing in Then It Fell Apart is actually very, very good; peppered with metaphor, laced with alliteration, and always entertaining. Even when he’s describing the simple task of snorting cocaine in a club toilet, Moby makes things sound poetic.

Moby’s antics and anecdotes reveal he’s been as much a whore for sex and drugs as he has been for fame.

The only time his prose appears superfluous is when he is writing about his biggest passions – these being music collecting and playing music; subjects in which he ought to be able to get more colourful. In some of these moments, the reader could probably do without knowing the beats per minute of a given dance track or how much he idolised Echo & The Bunnymen lead singer Ian McCulloch.

Even more ironically, Moby is his most poetic in scenes where he’s caught between the role of ardent fan (his dinners in with David Bowie, Laurie Anderson and Lou Reed) and that of playing celebrity idol himself (countless encounters with supermodels and actresses, including a relationship with Natalie Portman that she partly denies). It is here that the writer’s vulnerability shows through most, and where the reader (and indeed avid fan) begins to twitch and sense the same sort of strange dissonance Moby was probably feeling when playing out the events. 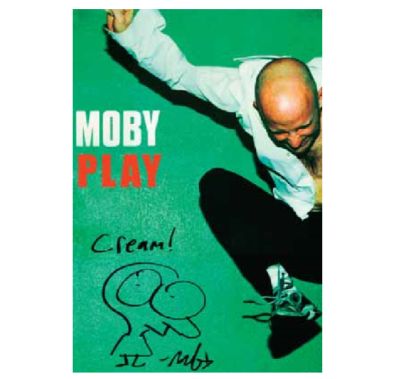 Moby signs an autograph for Cream at the peak of his musical success, 1999.

Far from being a typical dim-witted celebrity, Moby writes like a true author, leaving you to wonder if the penmanship might be hereditary (his great-great-great uncle, Herman Melville, wrote Moby-Dick and the name was carried down a couple of generations).

But amid all this riveting text, one word Moby fails to mention is a rather common one: commitment. That is, it may actually be a lack of commitment to relationships that sends him into panic attacks, not necessarily worry that a prospective partner might find him unattractive. Indeed, the guy’s antics and anecdotes reveal he’s been as much a whore for sex and drugs as he has been for fame.

Moby is a rock’n’roll whore of the most obvious kind. Or, I should say, was. Some things have been forsaken so that, thankfully, his talents are still with us in the form of good music (I went straight online and bought his latest album, so inspired was I by the guy’s life chapters so far).

Here’s to a third autobiography some time down the line, which I’m guessing will be called And Then It All Came Back Together Again or – given there’s a habit here of naming books after record titles – something like Everything Was Beautiful and Nothing Hurt (the title of said latest LP).

One thing I’ll bet: it’ll be written by a man who sees life more clearly now that the rose-tinted lenses of fame and fortune are finally being lifted from his face.