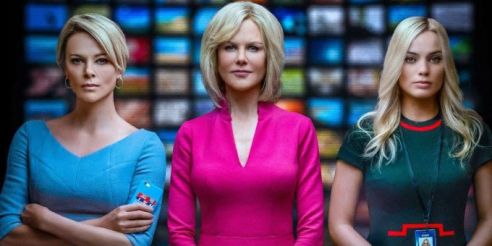 At a time when the #MeToo and TimesUp movements have exposed many true cases of sexual harassment in the entertainment industry, comes a feminist revolution of a film that tackles the controversial issue head-on.

Directed by Jay Roach, Bombshell is a heavy-hitting political statement that charges male predatory behaviour as a serious crime against women; one which will no longer be swept under carpet in a men’s club of secrecy and domination.

The creepy, misogynist, primarily male Harvey Weinsteins of the world are evidence of the carnage these accusations lead to, which in turn will hopefully influence future generations to foster fairer and safer behaviour between the sexes.

In Bombshell, the story of Fox CEO Roger Ailes and his sexist operations are laid bare, told in a kind of first-person documentary style. While the viewer knows full well this isn’t a doco, the intense style of cinematography (pans and dolly shots through corporate hallways; closeups of unmade faces) suggests the director would like to see it viewed as such.

Knowing glances from only the female cast members make for an interesting reenactment of real-life scenes that might otherwise have only been witnessed by proverbial silent flies on walls.

The cast is all-star, featuring three of the fiercest women in film. Charlize Theron and Nicole Kidman play the roles of real-life TV anchors Megyn Kelly and Gretchen Carlson, respectively, while Margot Robbie is strategically placed into the picture as a fictional character of sorts or, more the the point, a metaphor of all the young females abused while attempting to climb their respective career ladders.

The role of former Fox boss Ailes – who was charged with serial sexual harassment cases – would not be an easy one to happily take on, but John Lithgow bravely (and boldly) takes up the task.

In one scene, Ailes is practically forcing young recruit Kayla Pospisil (Robbie) to exchange sexual favours for faster career advancement. It’s a scene so charged with unnerving tension that it’s quite disturbing to watch. No audience member wants to be a voyeur in this particular sexual encounter but it serves to stand for all the affliction men like Ailes have caused.

The obvious villain, Ailes goes down spectacularly under Fox owner Rupert Murdoch, played by Malcolm McDowell, and while this surprise scene might have audience members wondering why Murdoch has gotten away with his own sexist agenda (at least in his magazines’ early presentations of woman-as-daft-object), that stuff is for another film.

Murdoch’s sons are played by two Aussie actors, who are also real life brothers, Ben and Josh Lawson. Personally, I found this a great choice of casting. One of the highlights of Bombshell is the extended fabulously talented supporting cast who all give admirable performances, including the lovable Mark Duplas, playing the husband of Megyn Kelly, who also happens to star in The Morning Show with Jennifer Aniston (a series about a TV news producer going through her own sexist hell, no less).

Also outstanding is fan favourite Alison Janney who plays Ailes’ personal attorney. Again, it’s a role that could be approached with disdain to play but one that is taken on ardently by a brilliant actor.

In sum, Bombshell is an all-engaging, somewhat sobering film that everyone should see. It contributes to the historical movement of supporting a chorus of female voices who are finally speaking out after decades of being muzzled and victimised.

The more stories such as this are told on screen, the easier the breaking of silence and closer we get to ending the abuse.

‘Bombshell’ is in cinemas now.