Booka Shade is the somewhat unlikely success story of muso duo Walter Merziger and Arno Kammermeier, who began as producers in the 1980s “for little girls and boys who wanted to be stars for five-minutes”.

They soon abandoned these frivolous ventures to pursue their own, more credible path.

In May this year, the duo will release their 9th studio album. On May 9th as irony would have it.

Here, Walter Merziger chats with Cream about dance music and keeping in touch with fans and muso friends, virtual style.

“There is this standard dance minimal sound, but we don’t want to follow that,” says Walter Merziger, one half of Booka Shade as he gazes out at Sydney Harbour from the balcony atop the Intercontinental Hotel. “We never planned that someday we’d be in Australia for a big festival sitting in the rooftop of this hotel. It’s amazing we’ve come so far.”

Mind you, this interview was conducted a while ago – before music festivals, clubs and anywhere that a good time could be had were cancelled or closed down due to Covid-19 chaos.

Merziger, and partner in rhyme, Arno Kammermeier, have just finished recording their 9th studio album, beautifully titled Dear Future Self. The album was recorded and produced right across the globe, taking in recorded sessions in Berlin, the UK and New Zealand.

To round out the multinational flair, the album features collaborations with artists from Iceland, South Africa, England and Germany.

“We’re different from a lot of other bands in that we constantly produce and write on the road.”

After testing new songs at all manner of gigs – from raves in industrial warehouses to aforementioned music festivals and even the smallest clubs – only the essentials made it onto the LP.

“We’re different from a lot of other bands in that we constantly produce and write on the road,” tells Walter. “So the music pretty much reflects what happens at that time. With [previous LP] The Sun and The Neon Light, for example, we were not in such a good mood, we were confused about which direction we should go, so it was darker.”

On the other end of the spectrum, completed at a time when most of the world was going into lockdown, Dear Future Self has a certain element of reflection and pensiveness in its style and delivery.

“When the world stands still, it‘s time to reflect about life, the people around you, and what’s really important to you and yours,” the duo wrote in a post on their website recently. 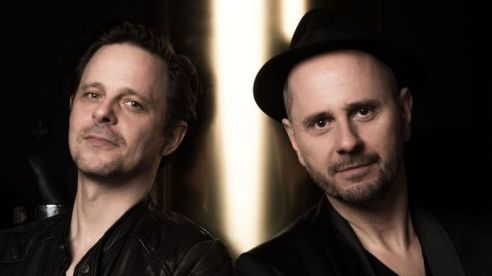 While social contact is currently off-limits, Booka Shade are keeping in regular contact with fans and muso friends via Insta, Facebook, Twitter and the like. One of those muso friends, we’re not too surprised to learn, is Dieter Meier, singer with seminal electronic outfit, Yello.

“We went to their house recently [well, before Covid lockdown, we assume], a lovely villa overlooking Lake Zurich. And there was still a great connection,” Kammermeier says of the experience. “Dieter said he was ‘inspired’ by our music. He said, ‘When I listen to your music, I think of girls. All the time.'”

Asking Kammermeier if he thinks he’ll be making music once he’s gotten into his 60s or 70s, he says with a wry smile: “Put it this way. If we go with what Yello say, I think we will have to put our own music on when I’m 63!”

Booka Shade’s ‘Dear Future Self’ is out May 8th, that is May 9th in Australia.