Despite having filed for Chapter 11 bankruptcy last year, subscription box service Loot Crate is reportedly back in the merchant loop, now operating under a new name (The Loot Company) and owned by Money Chest LLC. Hmmmm.

If, like us, you love your gaming and filmic experiences beyond the screen – and if you can forgive the financial faux pas of Loot Crate last year, you might like to put your trust back into the brand.

Once called “Comic-Con in a box”, Loot Crate has lovers of merchandise waiting with bated breath to see what surprises arrive in their crate, in the form of figurines, tees, mugs, caps, anything featuring our gaming and pop culture favourites. 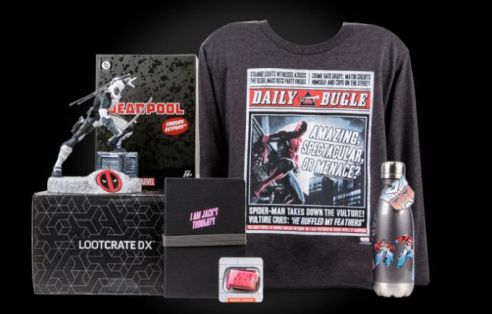 This month, packages start from $46.00 a month (plus shipping) and include a ‘Go Beyond The Game’ crate, featuring a surprise assortment of official and exclusive game gear and collectibles.

Who knows what you might end up with? A Fallout bobble-head, Mario t-shirt maybe, or perhaps even a pair of pixelated Galaxy Quest sunglasses. The fun is in the surprise, although it is guaranteed that in this month’s gaming crate, customers will score a Crash Bandicoot vinyl figurine.

Loot Crate’s themes change monthly while in the past the company has teamed up with such brands as DC, Marvel and Nintendo so as to provide fans with their cross-platform fix.

Oh, and Loot Crate has a second website called Loot Vault which has been created to let people buy specific items from crates… but months after they’ve been released.