Returning to Perth from October 1-14 is the St. ALi Italian Film Festival.

Organised entirely by Palace Cinemas, the festival continues to present the best new contemporary Italian cinema, and a few cherished classics, on the big screen. For more than two decades, the festival has celebrated Italian language, culture and la dolce vita with an ever-growing audience, last year attracting over 80,000 film lovers nationally.

A highlight in this year’s program is The Goddess of Fortune – Ferzan Ozpetek’s highly anticipated and award-winning comedy drama that explores long-term relationships changing over time.

The poignant story unfolds with a large family party that introduces all the main characters in one place – focusing on a secret dilemma as Annamaria (somewhat of an outsider) confesses concerning news to her gay male best friend, whom we are guessing was also an ex-lover, actor Edoardo Leo (turns out a lover’s tryst).

What to do with her two devoted children while she endures ongoing explorative tests in hospital, becomes the problem that grows more complicated simultaneously as the characters evolve in their personal resilience and fondness for the dependent close-knit children.

A predictable solution is not going to be so easily assumed, as the unfolding plot twist reveals the conniving plan of the villainous grandmother to forcibly take possession of the kids and reject the wishes of their mother, that the male couple takes the responsibility.

Note, this is a rather long film, at around 2.5 hours, and it would have benefited from a tighter edit, but the story does span multiple sub-plots between a diverse village of likeable characters that are interconnected with an emphasis on unity. The film is progressive with inclusivity of every modern subcultural representation from LGBQT gay couple and trans divas, single parent families, middle aged couples enduring dementia, and black African females aspiring to operate their own business. 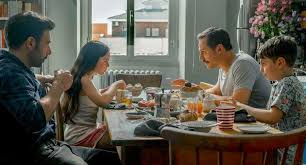 Truly, a contemporary blend of Italian way of life which is unashamedly empathetic to the underdog, although hovers around stereotypical leaving some of the characters rather two dimensional. The protagonist Annamaria Muscara is performed by Jasmine Trinca   is however, a believable female feminist with much angst that upholds choice and liberty as the glue to her family’s happiness. But these subversive values don’t agree with her overbearing and cruel estranged mother whom can be compared to the cold-hearted Mother in the classic novel A Fortunate Life.

The idea that it takes a village to raise a kid is an old fashioned one, yet here is explored with a contemporary take questioning how difficult raising a family is when the parent’s become tragically unhinged. Fate and fortune is the symbolic meaning behind the title The Goddess of Fortune which is the personification of luck in Roman religion. From this existential theme, arise many questions with uneasy answers which make the audience ponder their own vulnerability and cherish the loving bond of their own family.

A lovely heart-warming film with incredibly realistic performances from a talented Italian cast that is worthy of its awards.

Also at this year’s film festival, I recommend catching the opening film, a new live-action version of the classic fairy tale Pinocchio. From the Director of Gomorrah and Dogman, Matteo Garrone’s seven-time Nastro d’Argento award-winner is an enthralling gothic fantasy starring Italy’s beloved Roberto Benigni as the woodcutter Geppetto.

Full program and details at www.italianfilmfestival.com.au.