Sad loser Donald Trump is peeved off that First Lady, Melania Trump, hasn’t been “in Vogue” or featured in other fashion magazines nearly enough during his stint as President.

Not one major magazine has featured former model Melania on its cover during her husband’s entire presidency, prompting the Commander in Chief to go mental online over the lack of attention.

Trump shared a tweet from Breitbart News on Christmas Day complaining how “the elitist snobs in the fashion press have kept the most elegant First Lady in American history off the covers of their magazines for 4 consecutive years,” adding that Melania is “the greatest of all time.”

One of the last times Melania featured on the cover of Vogue was in February 2005 around the time of the couple’s marriage. Then, she looked gussied up in an old-school foofy wedding dress.

In fact, Melania has hardly sat in on a portrait shooting for almost a decade. If you Google her name and the word ‘portrait’, nothing comes up but closeup images of her on the tarmac or in the gardens of the White House – not a red carpet in sight. 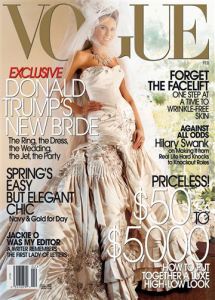 Melania Trump – who once received free designer dresses and other perks as a model – fell out of favour with the fashion industry once she married Trump. In fact, most major designers now cringe if the wife of the American despot is seen in their designer clothing.

Daughter Ivanka Trump, meanwhile, is still desperately trying to push her own fashion label and has been regularly criticised for copying the styles, cuts and prints of other designers.