I remember when I first heard of an ice cream called Golden Gaytime and thought, “How radical, an ice cream that has the word ‘gay’ in it – and they’re getting away with it!”

Of course, the use of the word had nothing to do with homosexuality but more to connoting the idea you truly are happy eating a Golden Gaytime ice cream. Still, I’m surprised to read that the treat has been around (in New Zealand, at least) since 1959.

Now, the ice cream that once blew my mind is doing so again – being mixed with one of my all-time favourite cereals, Coco Pops.

Golden Gaytime and Coco Pops have joined forces to bring Australia’s favourite ice cream flavour and chocolate breakfast cereal together in not one, but two exciting creations.

First up is the Golden Gaytime Coco Pops cereal which is twice as crunchy as the pops we’re used to, given that it is laced with a golden toffee-vanilla flavour.

Now, don’t expect to see a bowl full of choccy pops with specks of white; in fact the opposite is true here, with this recent mash looking more like “tanned Rice Bubbles with chips of chocolate scattered throughout”, as Lifehacker so cunningly described it.

While the look of it takes a bit of getting used to, the taste is easy to get hooked on. In fact, I polished off an entire box of pops in three sittings within 48 hours. 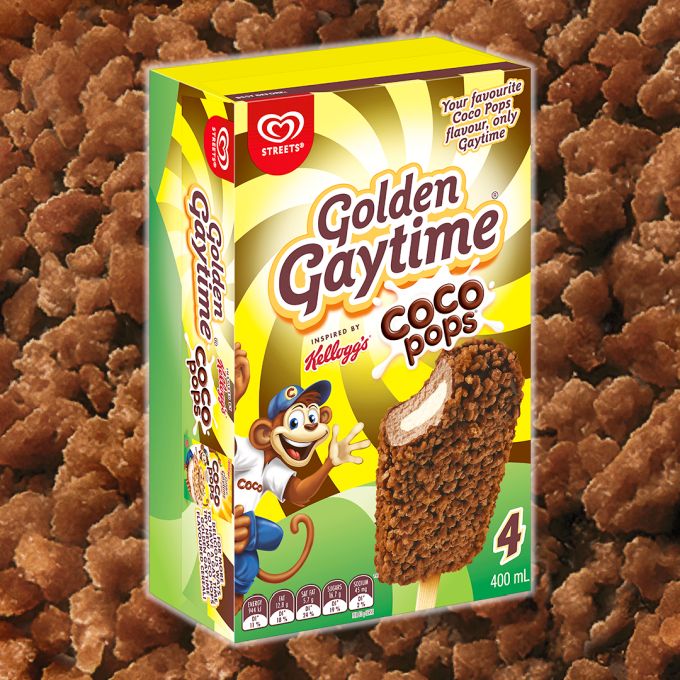 Next is the Coco Pops Golden Gaytime ice cream which I haven’t managed to try but did read in the aforementioned Lifehacker review that the coating tastes “like chocolate milk powder without the milk … like licking a bucket of Nesquik.” Hmmmm…

The fact is, Golden Gaytime has always been considered a rich treat – just heavy enough in its combination of flavours and textures. To use it as a texture-adder to other foods is a clever idea, but to add even more flavour and texture to it is possibly overdoing it.

We’ll stick to the cereal for now, which ought to be going gangbusters with folks already.