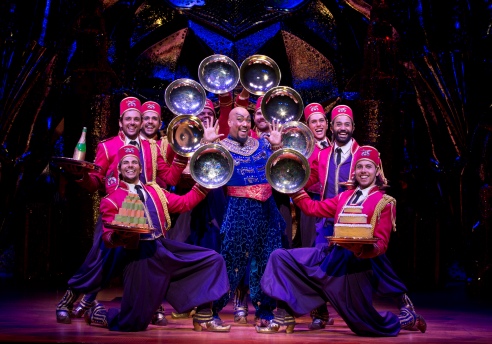 I read a lot of Golden Books when I was a kid, but I was never drawn to Aladdin. Nor was I interested in seeing the big-screen version of the classic fable – which came out in 1992. While everyone else was ‘touched’ by the ballad A Whole New World, I was more getting into anti-commercial grunge like Suede and Nirvana.

But I’m all grown up now so I figured seeing Aladdin: The Musical decades on is something I must tick off the bucket list. I mean, if a story and its various adaptations have that much longevity…

Boy, was I grateful to have caught the opening night show at Perth’s Crown Theatre. Aladdin: The Musical literally sees a brilliant story come to life, with stage sets designed in a giant ‘picture book’ way, one scene gorgeously framed in bright orange boarding, another seeing a magic carpet suddenly start flying (and you couldn’t even see the wiring).

My guest was well-familiar with the Aladdin tale. I just knew it had something to do with a lantern, a genie and three wishes. Hence while my guest bragged that he can still remember the words to “all these songs”, I was simply struck by the quick wit and fast pace of the dialogue.

The latest incarnation of Aladdin sees the genie making more contemporary pop cultural references than you can poke a selfie stick at. He’s also very clever at localising the production, making references to W.A. suburbs and goings-on that could only work on the Crown Perth stage. And the audience loved the local touch.

Speaking of the stage, kudos to a sound and lighting team who truly brought a rich and colourful story to life. Like I said, it’s like watching a picture book in 3D motion, only larger than life.

The scene where Aladdin first enters the genie’s cave and the set suddenly turns an entire shimmering gold is magical, to say the least.

There are many musicals that are tagged as suitable for kids and adults alike. This is quite possibly the most suitable. A common fairy-tale that’s easy to follow while you’re mind is being blown by a spectrum of colour and special effects.
Five stars, and all seven shades of the rainbow.  Antonino Tati

‘Aladdin: The Musical’ is on at Crown Theatre.