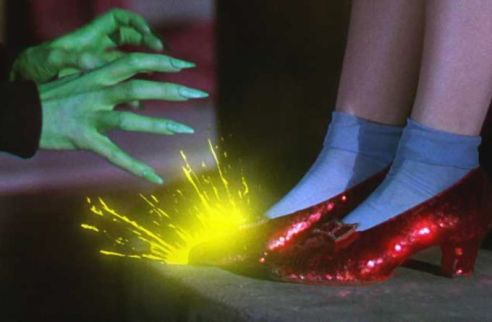 The ruby slippers worn by Dorothy in The Wizard of Oz, which have been missing for 13 years (ie: stolen) have since been recovered and will return to their display cabinet at the Judy Garland Museum in Grand Rapids, Minnesota.

The shoes were lifted from the museum in 2005, held onto by the thieves during various attempt to extort the owners, the Markel Corporation.

FBI were informed of a heist last year that connected them to the shoes’ most recent whereabouts. The bureau has multiple suspects on its list in connection to both the most recent extortion effort and the initial theft.

Though valuable – they’re insured for one million dollars – these red shoes aren’t the only ones in existence. At least four pairs were rotated for use in the film, two of which are now owned by private collectors – including Leonardo DiCaprio and Steven Spielberg in joint ownership, and another displayed at the Smithsonian Museum.  Antonino Tati