For this year’s Met Gala in New York, organisers issued a memo to guests that stated the dress-up theme would be ‘Camp’.

According to Fug Girls co-creator Jessica Morgan, “Making camp the Met Gala theme is an excellent way for [Vogue editor] Anna Wintour and Co to ensure that people show up wearing something joyfully outrageous… and that’s welcome to [sic] everyone right now.”

Subtitled ‘Camp: Notes On Fashion’, the Met’s 2019 theme was a direct play on an essay by famed feminist writer Susan Sontag whose Notes On ‘Camp’ attempted to define a notion that not even she could pin down. Heck, the word is so tough to conjure precisely, Celine Dion initially thought it meant ‘camping’ – literally – and was about to don a poncho before stepping out to the Met in an OTT fringed leotard.

‘Camp’ is so open-ended a word that entire articles were published in the week before the gala, asking outright What does ‘camp’ mean? These ranged from trite mini theses on MSN’s main website to patronising pieces in Variety that went straight to the horse’s mouth in interviewing actor Billy Porter, who played a flamboyant MC in Ryan Murphy’s Pose series.

Even someone as progressive in their representation of non-binary gender, such as Porter – who hit the Oscars red carpet this year in a half-tuxedo/half-ballgown – minces his words when it comes to defining the tricky adjective.

Porter told Variety magazine last night, “Camp means as hugely over-the-top and grand and what some may feel is ridiculous and silly, and embracing all of those creative impulses inside us that very often are squelched.”

It was enough for any queer fan to be absolutely overwhelmed by, let alone having left most of the world’s straight male contingency wondering, “What the fuck do women want from us?”

A little like the word ‘postmodern’, ‘camp’ has had a chequered history in its literary lineage, not only in academia but in everyday chatter and critique. It’s an adjective so broad in its definition (forget the fact it started out as a noun first) that it often gets misused when injected into the mainstream vernacular.

But it’s not so much the misuse of the word that is a problem but its misinterpretation en masse which in turn could damage serious movements whose representatives adopt it as farcical retrogressive guise.

In short, last night’s Met Gala was a shit-show of over-the-top outfits that appeared to take the piss out of being gay, trans, or female, with sheer slut looks outnumbering boring stiffs by about 10 to 1. Don’t even try to bring up the term ‘slut-shaming’ here, folks.

One viewer wrote on Variety‘s comments wall, “The Met should charge [Gaga] a big fee for using their property to promote herself. Yeech. Creepy. Women are sluts. Some.”

Porter himself was carried out like some messed-up Cleopatra on a golden stretcher pall-beared by a bunch of atypical gay-looking eye-candy. Rather than pay tribute to the Egyptian goddess in decent face paint, his mug looked like a roided-up rugby player beaten on the field, despite the drag costume jewellery draped across it.

Other stars were just as over-the-top and confusing in their interpretation of camp.

Lady Gaga started out in a pink tent of a gown, matched with an over-sized head bow, then threw this off to reveal a black ball dress in which she feigned looking pregnant, then a pink rip-off of Marilyn Monroe’s frock in Gentlemen Prefer Blondes to, ultimately, a partly see-through bikini with fuck-me boots proudly on display. Stripped down to basics, Gaga looked like a battery-operated bimbo doll whose lithium was running low. 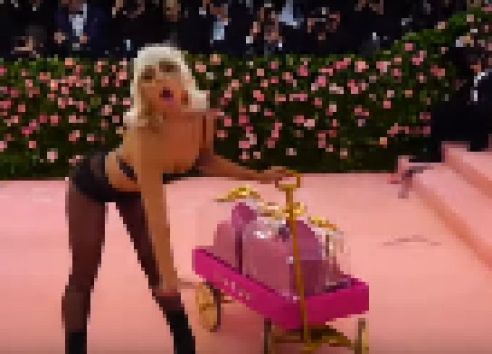 It was enough for any queer fan to be absolutely overwhelmed by, let alone having left most of the world’s straight male contingency wondering, What the fuck do women want from us?

It almost came across as an explosion of feminine sexuality being touted after two years of disciplined and dull man-like dressing post #MeToo and TimesUp.

As for other unsettling looks on the pink carpet, Cardi B donned a blood-red ballgown-come-tent fringed with 30,000 feathers (probably in attempt to overshadow Gaga’s entry); Katy Perry looked like a chandelier, complete with light bulbs drawing attention to her flesh; Rita Ora, J.Lo and Donatella Versace wore flimsy frocks with half their breasts showing; Kylie and Kendall Jenner looked like Vegas showgirls; Janelle Monae decorated her left breast to look like a giant eye; and Nina Dobrev wore a fairy princess-like tulle skirt with her gusset almost showing. Cara Delevingne, meanwhile, took all the colours of the rainbow flag and applied them to her Halloween whore outfit. 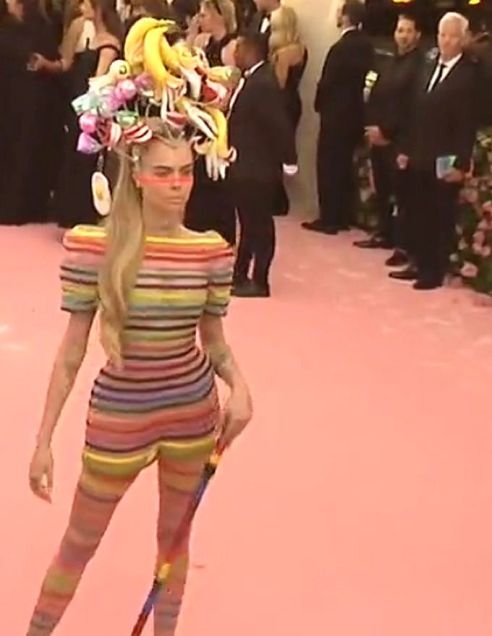 It was all a far cry from the dark and dressed-down looks seen on Emmy and Oscar carpets two years running, post #MeToo and TimesUp. In fact, it almost came across as an explosion of feminine sexuality being touted after two years of disciplined and dull man-like dressing.

So, is that what ‘camp’ means to these predominantly heterosexual female stars today? To simply dress like they used to pre-TimesUp – indeed, an over-exaggerated version of this?

It might seem I’m splitting hairs when I say the word ‘camp’ was misappropriated at this year’s Met Gala, but take a look at a gallery of photos from the event and then ponder the fact that women are still fighting to have Harvey Weinstein’s errs aired in public and for change to really occur in the patriarchal Hollywood system.

‘Camp’ was a word first appropriated by the gay and trans communities to denote a kind of inside joke. When a drag queen makes a mockery of the restrictive way his mother used to dress in the 1950s, this is camp. Yet even members of these groups still scratch their heads at the true definition of the word, some not even sure where the phrase “camper than a row of tents” came from. But, like the soft insult ‘gay’ and the harder insult ‘tranny’ both came into danger of being misused by hetero trendies for the first time, ultimately insulting their source subjects, ‘camp’ – when displayed so irreverently and confusingly, as it was at this year’s Met Gala – can pose problems in the greater scheme of things.

Heck, when Celine Dion gets confused by the memo and actually thinks the Met Gala’s theme referred to outdoor camping, you know there’s going to be trouble in relaying a seemingly simple message.

Probably the only star who got the ‘camp’ thing right – and looked damned near perfect on a couture level – was Ezra Miller who dressed in a pinstripe suit-come-skirt decorated with a diamante bodice, and whose makeup included repeated versions of his eyes painted over porcelain foundation. Makeup artist Mimi Choi did such a remarkable job with the paintwork, I had to do a triple-take to pick out his actual eyes.

Now this is the epitome of camp, where both traditional gender roles are equally warped, but with a sense of style, a good dose of humour, and just a tinge of darkness. Look carefully and you’ll even spot a hint of Michael Jackson in there… Creepy? Maybe. Camp? Definitely.

What Porter and his fellow Met Gala hype-inflaters did this week was turn the study of non-binary gender into folly and farce. Met Gala 2019 was more like a circus, a freakshow, a joke. Something to be ogled and amazed by, if not ridiculed and laughed at by the mainstream. In doing so, so too were a lot of notions of queer empowerment, trans representation, and the hardest hit of the lot, traditional femininity. If ‘camp’ to J.Lo, Gaga and Rita Ora means getting their tits out for the boys after bandaging them up for a couple of strict years, what floodgates have they just opened up?

Porter ended his chat with Variety by saying. “We need a little joy and we need to not take ourselves so seriously all the time. Everybody needs to laugh, and camp facilitates that emotion.”

It can also send out mixed messages that make important movements, once serious in their intent, ultimately look like B-grade clown acts.