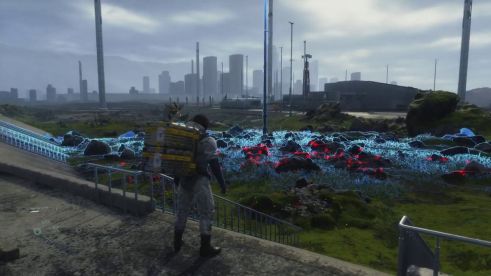 In a post-apocalyptic scenario, your character Sam – essentially a delivery man – runs various packaged goods from city to city while also helping connect the cities’ peoples to one other.

All this running around is in order to achieve his deceased mother’s dream of uniting humanity under the flag of the United Cities of America, all the while strengthening his own connection to and knowledge about his ‘BB’ – or ‘Bridge Baby’.

A ‘Bridge Baby’ (a baby that has been taken from a still-mother to be used by operatives) allowing you to sense ‘BT’s or ‘Beached Things’ (entities whose souls are stranded in this dystopian scenario).

Sure, it all sounds kookily coded on paper but you’ll get the gist of the game fairly quickly even if some information is gradually leaked.

For every ravaged city, every darkened sky, every semi-condemned building, Kojima has drawn from his passion of noir and adventure cinema, making ‘Death Stranding’ an epic adventure in itself.

The game is highly cinematic and story-driven but information is slow to come. Sometimes you really wish the narrative would speed up. But then this slow process of information discovery is probably what it would be like in a messy, post-apocalyptic world. 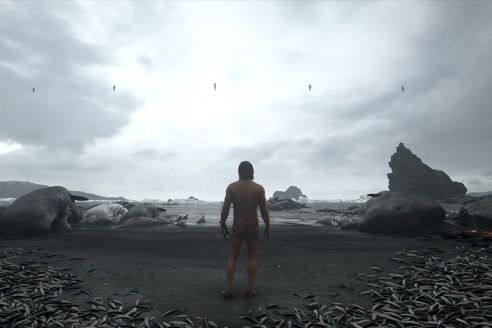 The controlling mechanism of balance is unusual in this game, but it allows you to enjoy the atmosphere and breathtaking graphics.

Director Hideo Kojima (Metal Gear) is consistent in his delivery of visually rich story and sub-plots that step away from combat (his original preferred genre) and ventures into intrinsic territory with a twist.

Aesthetically, Death Stranding is astonishing. For every ravaged city, every darkened sky, every semi-condemned building, Kojima has drawn from his passion of noir and adventure cinema, making Death Stranding an epic adventure in itself.

But the gravitas doesn’t end with aesthetics. Fixing the disconnection of the human race (even a hug is a big thing in this game) helps players realise the intrinsic sensitivity of human beings – no matter how tough we might think we are.

‘Death Stranding’ is available for PlayStation 4 and PC from good gaming outlets and to download from www.playstation.com.