Howard Donald of British pop band Take That ought to be feeling like a nob right now.

The 52-year-old one-time poster boy of the ’90s posted a photo on Instagram last week of he and bandmate Mark Owen standing alongside one very recognisable David Bowie.

The picture was paired with gushing prose about how nervous Donald was to meet his idol, insisting “but he was so normal and down to earth [it] made me feel at ease”.

Fans swarmed in quickly to correct Donald (or indeed, out him for lying), revealing that the photograph was an edited pic that originally featured him, TT singer Gary Barlow, and bandmate Owen.

The original photo was taken at a Take That reunion in 2007 so it isn’t as though it was from very long ago, and highly unlikely Donald has gotten senile since.

To add bullshit to the flame, alongside the pic, Howard wrote: “I was just gonna put this on my stories but then I though [sic] this is much more worthy of the main feed. For sure I was very nervous meeting @davidbowie as I’m not so comfortable around other famous people and can get star struck quite easily…”

Strange he was starstruck, considering the star in the actual photo was the LEAD. SINGER. OF. YOUR. OWN. BAND. 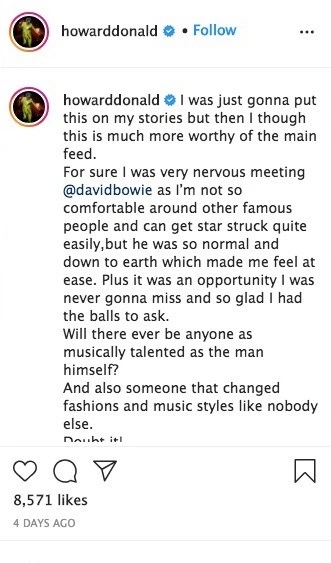 Nonetheless, Donald continued with the fantasy: “It was an opportunity I was never gonna miss and so glad I had the balls to ask … Was a pleasure Mr Bowie. X.”

One fan wrote: “Ummmmmm… this is an edited picture, Howard.”

But why stop there, Howard? You could have showed that classic photograph of Bowie when he was actually a member of Take That…

David Bowie when he was once a member of Take That but never met them, circa 1993…

What I don’t understand is why someone fairly famous himself – such as Howard – would need to go to such lengths to fabricate six-degrees-of-separation stories?

Howard has since said he was duped into thinking the photo was genuine… but seriously, who would not be able to recall actual details of meeting David Bowie?

As it turns out, the images were photoshopped by a Take That fan named Lauren who has also slapped together pics of Mark Owen with Elvis Presley, and Gary Barlow with Freddie Mercury. (Do you see where this is going, Howard?).

A tip to washed-up pop stars… Keep your genuine friends close and your online fans even closer. You never know when they’re going to try and dupe you.

The writer of this article snapped with Take That’s Mark Owen in 1994. Yes, the pic is real.