Artist Chris Barker has paid tribute to a bunch of pop cultural icons who have passed away in 2019, using The Beatles Sgt. Pepper’s Lonely Hearts Club Band album art as his template.

Actors who appear in the montage include Peter Fonda, Peter Mayhew (who played Chewbacca in the Star Wars franchise), Luke Perry (of 90210 fame), Rip Torn, Bob Einstein (of Curb Your Enthusiasm) and puppeteer Carroll Spinney in the form of Big Bird, the performer having passed away last week.

From the fashion field it is Karl Lagerfeld who mainly stands out, but even Grumpy the YouTube cat gets better positioning than Karl, sitting on top of Ringo’s drum, while the Sumatran rhino takes up the most space in the picture.

“I love the effect of the giant rhino poking into the group [as if] being ignored like the elephant in the room.”

He tends to take the most popular icons and position them at the centre of the artwork (in place of The Beatles’ John, Paul, George and Ringo) and peppers the front of his canvas with iconic symbols of the year – in this year’s case plenty of plastic.

The artist said he was inspired to create his first montage in 2016 in response to the shocking outcomes of the Trump election and the Brexit referendum, saying “I think the world was going through a kind of collective grief.” 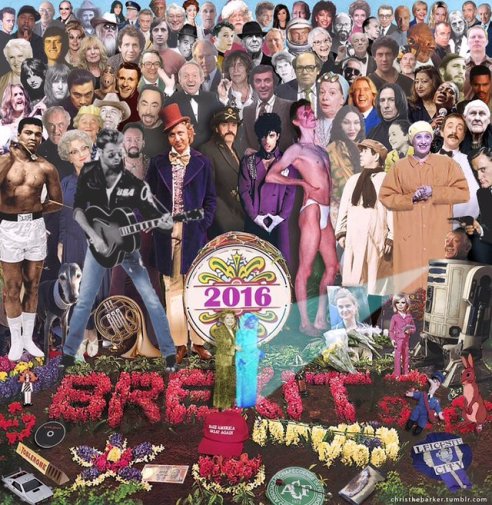 The artist’s first montage tribute in 2016.

Barker says he decided to use this year’s montage to “focus on the perils of plastic pollution and using the Sumatran rhino to highlight the plight of endangered species around the world”.

“I love the effect of the giant rhino poking into the group,” the artist told Billboard magazine, “[as if] being ignored like the elephant in the room.”